Friday morning we were away fairly early and arrived at “Oakham Bites”  in good time to enjoy our “long awaited” double bacon baguettes, yummy yummy.  Our drive to the M25 was clear and we made good time which is more than can be said for the rest of the 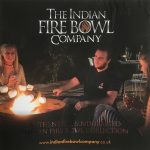 journey.  Oakham to The Dartford Tunnel was a nightmare, bumper to bumper and not helped by the M23 being closed due to flooding.  We eventually got through the tunnels and headed to Woodham Ferries to look at Indian Fire-pits:  we fancy one for our patio but after seeing the size, we had to reconsider as it was far too large to fit in the car due to  everything else we had.  We finally arrived at Jane’s in time for dinner. 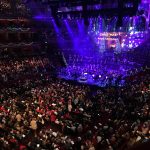 Saturday 21st and we headed down to London to meet up with Andrew and his new girlfriend, Holly.     This afternoon we were going to another carol concert, but this time at The royal Albert Hall.  We didn’t have the famous “Alan Titchmarsh” on this occasion, but the compare we did have was very good, and a good time was 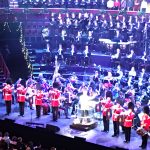 had by one and all.  The Royal Albert Hall is a magnificent venue with acoustics to match.  After the concert we left and after a rather extended taxi ride due to heavy traffic, we arrived at the Chiltern Fire House, a drinking establishment in a converted old London fire station.  The surroundings as we walked in were very 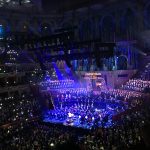 Such a magical place

opulent,  and the three barmen were all dressed in white dinner jackets; it looked rather expensive!!!!  I ordered 2 Gin and Tonics, a glass of white wine, and a glass of bubbly and expected the worse but wow, I never in my “wildest” did I expect what came; I was presented, “very nicely”, with a bill for £81.65: I won’t be going there again!!!!!

After drinking the “liquified gold dust” we headed over to Il Baretto, a very nice Italian restaurant just over the road from the Chiltern, here Andrew treated us to some excellent food, especially the fish dishes.

After all our good byes were said we headed back to Liverpool Station and caught the train back to Shenfield and were met by Dave who took us back to Pascals Paddocks.   We are staying with Dave, Jane and Mia for Christmas so are settled now ‘till the 30th December: our travelling in the U.K. will then be complete.

Both Sunday and Monday were taken up with “Mia” duties, washing, 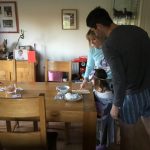 Checking if Santa had left a note, which he had

ironing, shopping and in between, relaxing.

Great excitement Christmas Eve, and to take her mind off it Mia had her friend Mason over to play all day.   By the end, everyone was anticipating Mia would crash-out as the two of them had charged 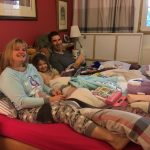 around non stop all day; they played both inside and out, never stopping.   After dinner Mia wrote a note to Father Christmas and put it with a mince pie, glass of port and carrots ready for him, hung up her stocking, well a sack! and then we all sat quietly and watched a Christmas film to calm her down.    Guess what, no such chance, she was wide awake at bed time though eventually she did crash-out and then everyone sprang into 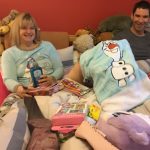 Mia getting stuck into her presents

action to get all the presents around the tree etc.

Christmas morning and the “oldies” were up early impatiently waiting for Mia to wake.  However much noise we made and in-spite of pulling the curtains, she carried 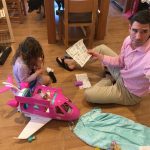 on sleeping.   During this time Jane had managed to put blankets on, and turn out, several horses “and” still change back into pyjamas and be in bed for the moment Mia arrived towing the sack filled with presents from Santa.  But it didn’t end there, Santa had had also delivered stockings for everyone.  There was great excitement as 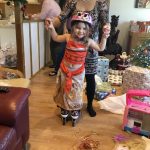 Mia on her new skates!

Dave and Jane with Mia between them on the bed, and Christine, Irene (Dave’s Mum) and yours truly on chairs all opening our presents and eating chocolate: a very happy family moment.

During the morning there was open house at Pascal’s Paddocks, Dave was busy cooking bacon butties for one and all. Jim and Sue then joined the party as we all sat down and opened the presents under the tree though I feel Mia was a 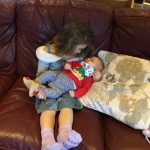 little overwhelmed with so many presents.  This session was followed with Jane and Dave cooking the Christmas dinner whilst the adults figured out how to assemble a number of toys; hard work or what!!!! 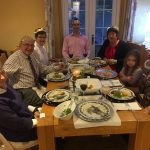 the usual Christmas trimmings, followed up with traditional Christmas pudding and washed down with copious amounts of various drinks; alcohol through to water!!!!

After clearing everything up, games were the order of the day. We were “expected” to play Twister but as we were all feeling 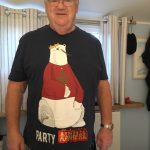 rather bloated, more sedate games were played.  We enjoyed Sevens, then there as a small cribbage school at one end of the table and a memory game going on at the other.  A break was then taken for a quick snack, ha ha  before we resumed; we then all played Mahjong, though it for four players we had some learners so played in teams.

After a wonderful and exhausting day, the party ended and we all hit the sack around midnight.   Thank you Jane and Dave for a great Christmas Day.

A rainy Boxing Day dawned and we were up, but not too early. Today arrangements had been made for a walk around Weald Park with the 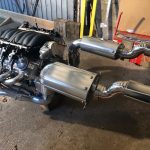 dogs and friends, but it ended up with a rush to get out on time in the end.  After a rushed breakfast of chocolate cake everyone went except me, I had elected to stay back, didn’t fancy walking in the rain and mud!!

An excellent lunch today, a “ Beef Wellington” was cooked by Dave and consumed as if we hadn’t had a square meal for the past 6 months, and this was followed by another rich Christmas Pudding; stuffed or what. 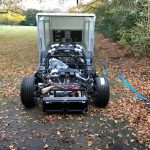 home to Newmarket by Dave, we on the other hand just crashed out in front of the tele and soon followed by an early night, after all we had over engulfed!!!!!

Friday was a “do anything” day, but Jane had been given an “Amazon Alexia” for Christmas.  We all had so much fun shouting an assortment of instructions, which I have to say  ”she coped with admirably”, that we just had to go out in search of one.   Curry’s PC World in Chelmsford had one, so mission accomplished.  After dinner we enjoyed a few games of Marjon.

Saturday morning I was pressed ganged to Harrow and roll the 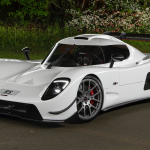 ménage before we could escape to meet our friends, Lee and Sarah in Chelmsford.  The main object of this visit was to look at the kit car Lee is building which was a 10 minute drive away from their house.   What a car it will be, a mid-engined, 500 + BHP Chevrolet V8 engine driving the a 6-speed gearbox in a space frame chassis with excellent aerodynamics and minimal weight.  This will be an awesome track car, I look forward to seeing the completed machine.   Back at Jane and Dave’s and after dinner we settled down to a few more games of Marjon.

Sunday, our last full day in theUK, and we headed back down to London to meet up with Christine’s son Andrew, but as the railway from Shenfield was out of action due to maintenance we drove to 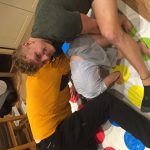 Stratford and then tube to Liverpool Street Station.

Back at Pascals Paddocks we packed up our surplus as tomorrow we are away early.  Today Tyla and Dan came down to go climbing with Dave and when they came back we all enjoyed a great meal and a fun evening before retiring at a reasonable time. 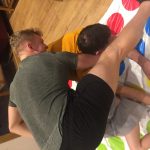 Mia is under there somewhere

Tomorrow the “great escape”  takes place, we head to Bruges for 3 days over New Year.

This entry was posted in Family, UK. Bookmark the permalink.