We arrived at Pigeons Perch around lunchtime, our Christmas destination, the home of Mark and his family. We had been looking forward to this for months and had everything crossed that we would get here this year following the awful 6-months I had just been through and of course any last minute restrictions Boris may have imposed; but we’re here now so up to our room, unpack and relax.

Since our last visit two and a half years ago the porch has been extended and during lockdown, a jacuzzi has been added to the garden, hopefully we’ll be in that tomorrow otherwise much the same.

During the course of the afternoon the family returned one by one and we all sat down to dinner, it was lovely to be here, son, daughter-in-law, two granddaughters and Dan, Tyla’s boy friend and of course Christine, a fully paid-up member of the “Page Family”.  After dinner, relaxing in front of the roaring log fire we all started to doze-off; Christmas holidays had arrived at the “Perch”.

We awoke to bustling activities from downstairs and Ashleigh heading to work, (Uni student, needs the money!!!). This morning is an  “all hands on deck working morning” for all of us, preparing everything for the next couple of days.   Everywhere you looked, fridge, utility room, garage, outside the kitchen door etc., there was food of one description or another, I know we all eat a lot over Christmas but I think there was sufficient food here for the whole of Chapel Brampton.   It was further exacerbated by the cheese board we were asked to supply.   Mark challenged us to get the following:-

Quite a challenge, especially the Red Storm but we succeeded;  we were also invited to add our choices so added 3-more, just in-case they ran short!!!!

During the past few months Dan bought his first home, a 1-bedroom apartment on the ground floor in a reasonably new block and as Tyla was heading that way I was asked to join them, I think they wanted me to see it.    Tyla took me in her car, the last time she drove me was when she was learning. 🤢🤢🤢,  today was the first time Tyla had driven me since passing her test several years ago 🤠🤠🤠; very good driver.   Not only has Dan got a very cosy ground floor apartment, he has French Doors opening straight onto a quiet part of the gardens.

Returning to the Perch and there was an enormous buffet laid out, including a rather spectacular cheese board!!!, and though 7-of us hit it hard, we hardly made a dent in it.  By the afternoon everything that could be done for Christmas Day had been done, table laid, vegetables prepared etc., etc. 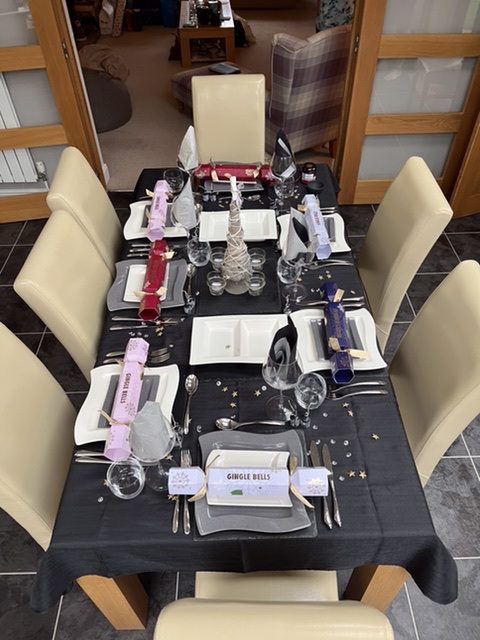 During the afternoon we all enjoyed several sessions in the Jacuzzi, far too long for me as it happened.  After my extremely shower, I sat on the edge of the bed “suffering” with shakes and that general un-well feeling.   I blamed the shower, it was ridiculously hot and the electronic switch was jammed so it couldn’t be turned down, but later we decided it was the hour or so spent in the Jacuzzi accompanied by G & T’s!!!!!!  Anyway back downstairs, again food was available and we all chatted when Dan came out with a new game called  “Linkee”, certainly a different to normal Christmas games, we actually had to think!!!!  We were all engrossed and the evening just flew by and it was soon time to retire.

We were woken up somewhat early by an excited Tyla running along the landing shouted “Merry Christmas”, so we all got up in our “jim-jams” for a Christmas breakfast cooked by Mark.   This was followed by a procession of us taking our showers.     Tyla and Dan went first as they had to head over to Dan’s parents whilst the rest of us showered then started supping Champagne, waited, drooling and just looking on at the mountain of presents around the tree and behind the sofa.  During this time Derek and Cath, Paula’s parents popped round for a Christmas drink.

By late morning with the turkey in the oven, Derek and Cath gone, expectations were rising but we were still waiting for the return of Dan and Tyla, still gazing at this mountain around the tree.  Fortunately it wasn’t very much longer before they arrived and the main business of the day began, but first we had our starters.  The presents kept coming, everyone was busy giving or receiving, paper flying until the turkey arrived; somewhat later than planned.

Mark carved the turkey with precision, I poured the Châteauneuf-de-Pape with care, and the

seven of us tucked into a wonderful Christmas lunch, turkey with all the trimmings.

Fully replete we cleared up and played games.  We started with UNO, always a Christmas favourite, this was then followed by another game bought by Dan called “Dobble”, this game was about observation and the younger players were very quick and I got well and truly stitched up, but laugh, we all hurt with laughter and during the proceedings Dan was given a new “nickname”,he is now officially known as “slug”, following this I was christened “lettuce”, I don’t really know why!!!!    To calm us down prior to turning in we had a repeat of the “Linkee” game  which was very good and certainly made the “little grey cells work overtime”.  The game is about answering questions, the correct answers are all connected, and the connection is the answer required to complete the round and win the point.

After a wonderful Christmas Day at Mark and Paula’s, and being with Tyla and Ashleigh, and of course Dan, made it very special.  It has been a long time since this side of my Family have been together, both Christine and I thoroughly enjoyed ourselves.   Tomorrow we have another party day so need our sleep so headed up.

Not too much of a rush this morning after yesterday’s hectic, but very enjoyable day though certain chores still needed doing as Derek and Cath are coming round; mind you there was so much help that we rather got in the way!!!

Once the scene was set Mark, Christine and I played a few bands of crib until Ashleigh suggested going into the jacuzzi, Christine and I elected not go in today, especially after the issue I had on Christmas Eve!!  Mark opened it up and went in with Ashleigh and Dan, we looked on from inside then resumed our game of crib.

Paula’s parents arrived in plenty of time for yet another great spread of food; a buffet today as there were now nine of us.  It was nice to catch up with Derek and Cath, again a couple of years or more since the last time we met up.

After the “big clear up” we all retired to the lounge for the Christmas quiz; a tradition in Page junior’s house together with a trophy.  This years quiz was written by Dan leaving the 8-of us to draw partners for teams of two.   Christine and Cath were one team, Tyla and Ashleigh were a formidable team, two graduates together, Mark and I were together leaving Paula with her dad.   Dan must have put a lot of effort into devising the quiz, with a number of varied topics each with 10-questions.   The banter that went on during the session was amazing yet Dan controlled it very well.

After all the questions, we marked each other’s papers and naturally that also caused some “friendly” confrontation due to disagreements with some of the answers.  The upshot of everything was that the two girls and Mark and myself were equal on points.    How to resolve this as the quiz rules state only one clear winner.   After much discussion, banter, disagreements tantrums we settled on tossing a coin; the best of three.     Dan tossed and the girls won the first two tosses so we’re presented with the trophy.   The main issue surrounding the quiz was that the majority of us are extremely competitive and none of us could consider not winning!!!!!!!

During the day poor Christine was starting to cough and splutter, the beginnings of a cold and by the evening she was full of it so went to bed early, feeling jaded.   With all the rushing about we had done since leaving Spain, not to mention the issues she suffered in Pilgrims Hatch, we all put this cold etc., down to the fact that she had now completely relaxed.   After her departure the rest of us carried on partying.

After Derek and Cath left and the clear-up completed I headed to bed only to findChristine coughing and spluttering badly and feeling generally run down so fed her with Panadol hoping a good nights sleep would put her right.

Christine woke me up telling the dreaded news.  She had just taken a lateral flow test and it was  clearly very positive, well you could have knocked me down with a feather as we had been so careful and had tested negative on four occasions prior to arriving at Pigeons Perch.  How on earth did she pick this up we wondered but had no time to dwell as the house quite rightly went into “panic mode”.  Paula managed to organise a couple of PCR tests at a mobile testing centre in Towcester, about 14-miles away within the hour,  so off the two of us went.

I must say I was impressed with this NHS testing centre, and though they were still setting it up, they were testing people; we didn’t have long to wait and were through within 20 minutes.

We returned to the perch about an hour after leaving and in that hour the five we’d left at home had disinfected and wiped down every possible surface and brought down most of our belongings to the door.  They had also very kindly bagged up some food but quite clearly, and rightly so, wanted us out and away.  For our part we were distraught , having been so careful we were aghast, how or where were we infected.  The worst part was the previous evening we had been laughing and joking with Derek and Cath, both elderly and vulnerable people and though all of us had been “triple jabbed”, one really doesn’t know.   The other bad news; Christine’s positive put the “kibosh” on the second part of Mark’s Christmas, tomorrow his mum with Jane, Dave and Mia were coming to stay, that has now been cancelled as his mum is extremely vulnerable at present.    Though we don’t get the PCR test results ‘ till tomorrow, we weren’t taking any chances so we left and headed to the Peak District, albeit 6-hours earlier than planned.