We woke Sunday morning to the sound the rain coming down like stair rods and after a late breakfast it was obvious there wasn’t going to be any let up so we donned our wets and set off. Fortunately most boaters stayed moored so we had a reasonable passage heading towards Llangollen passing the site of the Froncysylite Lime Kilns, 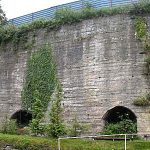 serviced by the Ellesmere Canal (Llangollen Canal today) when it reached this point in 1802.   Passing a large Winding hole and around the corner we arrived at the “Jewel of the Canal”, Thomas Telford’s Pontcysyllte Aqueduct. The 18-arched stone and cast iron structure, taking 10-years to build was completed in 1805. It stands 126-feet above the river Dee, it is 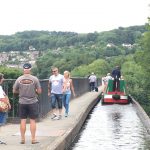 336-yards long and including the tow path is 12-foot wide and it is the oldest and longest navigable aqueduct in the UK and the highest in the world.   With no passing 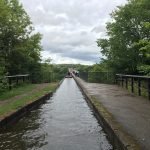 places one has to start and hope one of the many “plonkers” (already mentioned) doesn’t try to join you from the following direction.

Today we were lucky as we followed a sightseeing boat across who no doubt has a lookout the other end. 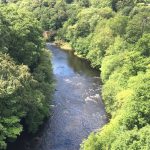 Looking down from Pontycylic Aqueduct

The towpath was busy with visitors walking across admiring the view though some did look a little apprehensive, probably because of the height.

Off the Aqueduct and we arrived at the bustling Trevor basin Junction, and rather than head to Llangollen we headed to the top of the arm, passing all the hire boats waiting to be hired out and. We watched the Hungarian Grand Prix highlights and enjoyed a cosy and quiet night, well apart from the rain that is!!!!!