After a good night’s sleep, we awoke to the engines being switched on, we are off to Sombrero Chino, which is a little island shaped as a Chinese hat.  We stopped at one of the 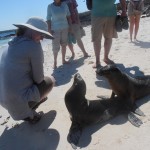 Stacey making friends with the sea-lions

islands and tried looking into a volcano crater at flamingos, I just caught a glimpse of them, not too worried as there are 100’s near where we live. 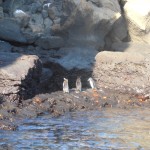 Penguins on the rocks

Then breakfast was taken, eggs with onion and tomato sauce, very unusual, but it tasted nice.  After we went for another walk, after first looking for the penguin’s again, they are very cute, and the smallest in the world, we saw sea-lions lazing on 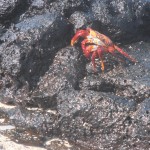 the beach; we sat down and just watched the waves cracking over the rock laver, with the crabs crawling all over, very pretty.

This was going to be our last snorkel, so we were all looking forward to it, the sea was a bit choppy, but I had two wet suits on, as one was so thin, it had lots of holes in it, so I was not going to get cold.  We all jumped in, and we saw many kinds of fish, then someone spotted a marbled sting-ray, then the penguin’s jumped in, also a sea-lion, lots of parrot fish, it was fantastic, what a way to go! The penguin’s just kept playing with us, and we managed to catch them on a cine film, a marine iguana swam along at the end, just to make our day. 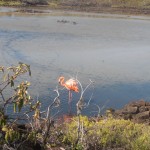 After lunch we did some navigation, to another Island it was called Cerro Dragon, which is located on the north west coast of Santa Cruz Island, we hiked up through Palo Santo and Opuntia Cactus forest, past a couple of lagoons where we saw one 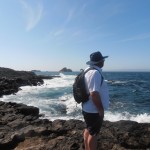 solitary flamingo, and two stilts.  It was a lovely walk, with a few land iguanas, but not much else.  Geoff was not really impressed, but I enjoyed.

Back on the boat, we had rum and lemonade, which I really enjoyed, then showered, and started packing, we have one more trip tomorrow before we leave to go into a Hotel, I have thoroughly enjoyed myself here.