After a leisurely breakfast, again out on deck, we headed off to pick up the shuttle to Cocoa Beach where the “Ron Jon Surf” shop is. The coach dropped us next to the shop and 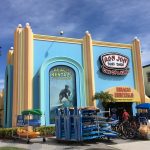 in we went. I had already said I wanted to visit this store when we get to Port Canaveral, as I wanted to get some floating glasses strap; so when I dive into the pool and they fall off, they float on top of the water. We found what I wanted but before we left the 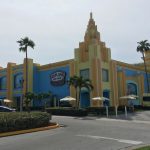 Wow what a shop 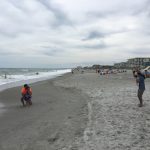 Coast”, with names such as Satellite Beach, Apollo Beach and more famously, Cocoa Beach where Ron Jon’s surf centre is. Naturally this area is so named because of “The Kennedy Space Centre” an area of some 140,000 acres where the first rocket took off into space in 1950. In 1969 the Apollo project sent Neil Armstrong to the moon from here and later, the space shuttles. The space centre is open to the public, not only is it a museum but it is also a bit of a theme park. We didn’t visit the site this time as we had been there a few years ago and nothing significant in “Space terms” has changed since we last visited.

After leaving Ron Jon’s we wandered down to the beach, armed with our swimmers and though the weather was chilly and 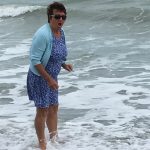 overcast, undeterred, Christine went for a paddle first, to check the water temperature; her face told the whole story; the sea was very cold. The beach was heaving, mainly with school children all playing volleyball on numerous courts marked out in the sand. We think there was an inter-schools competition. In the 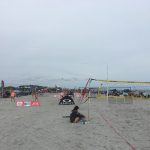 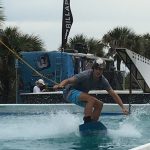 These guys were amazing

demonstration with a big jump. Naturally I stood in the wrong place and got soaked. 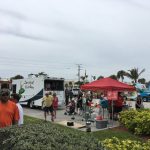 So much going on, an exciting place

Time to leave, so we picked up the shuttle and returned to the Q V where we slowly got ready for dinner.

Tonight’s “Showtime” was a group called Ida, 4-girl sopranos who sang opera to pop, Hollywood shows to West End shows. They were certainly excellent singers but not really my scene though Christine certainly enjoyed them, so that is the main thing