Martin and Marian made an early departure for the airport after which we sorted ourselves out before heading off for the day; firstly to Calpe (Calp).  The weather didn’t look too hopeful in the mountains hence heading to the coast, the sky looked more hopeful there.   It was so chilly that our long trousers came out for the first time this winter and our fleeces came with us. 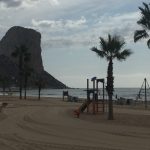 We drove into Calpe but soon drove out, we were not impressed as it looked just a like a seaside destination for hordes of people from Northern Europe; sorry if we have denigrated this place, but first impressions do count!!!

After consulting the map we headed along numerous back lanes and narrow twisty roads following the coast, stopping in the middle of the road (a la Spaniards) several time to admire the views.  The problem with main roads and motorways is you miss so much nice scenery, and there’s lots of that around here. 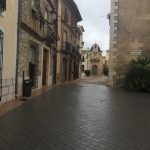 Our destination was Teulada, probably a little known old town with the first settlement dating back to 20,000-BC, though the modern Teulada was founded in 1386 and was fortified in the 16th century as it was constantly attacked by the Barbary Pirates operating from North Africa, even the church of St Catherine is fortified!!!!  We ignored all the modern bits and headed into the old town with its “very” narrow streets and found a suitable parking spot, left the car and all “wrapped up”, we went 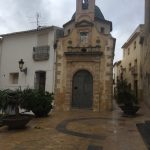 walkabouts passing through the market as the 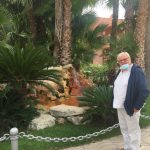 stalls were packing up.  We soon found the old square and made a bee-line for a bar as a call of nature was urgently needed, though naturally whilst enjoying the bar’s facilities, we had to have our customary coffee an brandy, but no cake!!!.  Whilst there we were seduced by the Menu Del dia but had to work up an appetite first so headed up the many steps deeper into the 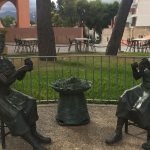 old town to where the church is but only to find it closed?. However whilst wandering about and climbing the steps leading further into the old town the rain 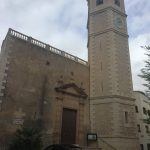 arrived, still as is usual at this time of the year it soon stopped and off we went again until we miraculously arrived back at the bar we’d been to earlier, so ordered our lunch.   For a menu Del dia, we had some amazing choices and finally noted the awards from Trip Advisor, 4.5 out of 5, and we concur, good food, courteous and friendly staff and excellent facilities, especially in today’s world!!!

Heading out again we drove along some twisty, off the beaten track roads with amazing villas hanging on the slopes of the mountain and 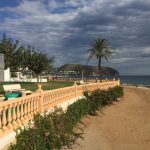 finally arrived at the pretty, small, up-market coastal town of Moraira where we had a wander along the front, and though it was a little 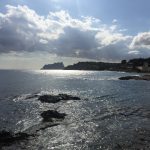 chilly, the sun was shining with blue skies.

Christine felt an immediate “bond” with this place and started to think about moving here, quite a surprise I can assure you!!!  We even stopped so Christine could look into estate agent windows as we headed back to base.

Back at the house and after a cuppa, the first thing Christine did was get online and look further to see what apartments were available in 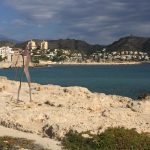 Tomorrow we hope to head to the little mountain town of Guadalest.