Firstly, we are officially in the tropics again, we went across the Tropic of Capricorn sometime during the night.

We awoke to find we were moored onto the commercial dock in Callao, the port area of Lima; Peru’s Capital city which has a population of just under 10-million.

Today, unusually for us, we booked a tour, “Lima Highlights” as we were informed the area around the port is un-savoury; where have we heard that before, I ask! And the old town is 15Kms away. Now we must admit that on this cruise ship we haven’t been bombarded by “Dotty” with extreme warnings for our safety, on the contrary we are treated as responsible adults so as we did receive a warning, we decided to heed it and hence we booked a tour.

After a little misunderstanding between Christine and I, we just made the 1030am departure time; we were the last to board!!!! Once we left the port gates we realised why we it had been suggested we didn’t walk about the area. Apart from they’re being nothing to do or see, the area was very run down and poor. 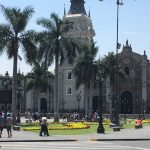 After Francisco Pizarro conquered the Incas and delivered South America to Spain, he founded Lima in 1535 though back then it was called “Ciudad de las Reyes”, City of Kings. Callao was created 2-years later as the main port for Spanish traffic in the pacific. Goods were taken to Callao from Peru, Bolivia and northern Argentina, crossing the Andes where necessary, then shipped up to the west coast of South America to Panama.   Here they were unloaded and transferred by mule and foot across the 50-mile Panamanian isthmus, and re-loaded onto ships to be taken back to Spain via Cuba. This rich port soon attracted Privateers and Pirates and city walls were constructed between 1684 and 1687 to defend the city.

We arrived in the “Plaza de Armas” (known locally as the Plaza Mayor) in the historic centre of the old town and it was here where we started the walking part of our tour. Many fine colonial buildings surround this large, colourful plaza 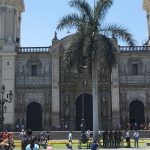 but the two most impressive are the Cathedral with the Bishop’s palace attached alongside, and the Government palace. But before we headed for the 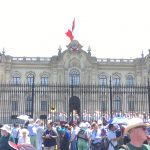 Colourful band changing of the guards

“compulsory” visit to the Cathedral, we heard a brass band; this was the start of “changing of the guard” at the Government Palace.   They marched about the parade ground in front of the palace, which is set behind railings; this in turn has Police, armed with small machine guns, standing guard. The band marched their way onto a large concrete plinth and played contemporary music for the public. Unfortunately we didn’t have sufficient time to wait around until the actual changing of the guard took place, our tour leader summoned and we all obeyed.

This Palace was built on the original site that Francisco Pizarro built his home. 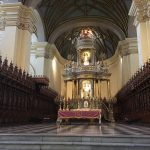 Beautiful parts of the cathedral

Building the Cathedral originally started in 1540 by the city’s founder, Francisco Pizarro. Unfortunately before the Cathedral really got going there were a series of Earthquakes, which resulted in numerous fresh beginnings. This is certainly a magnificent 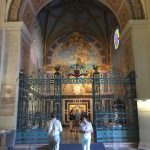 building oozing with Gold and silver and the choir stalls were all beautifully, and individually, carved in the local hard wood. Today the remains of Francisco Pizarro are in a special side chapel within this Cathedral.

After leaving the Cathedral we were marched across the Plaza, down one of the main streets to the San Francisco Church and 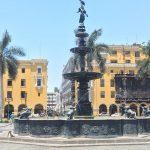 Monastery. Passing along the way we saw one enormous queue and upon enquiring we were informed this was a queue of people waiting to go into the bank; to take their money out or not we don’t know. 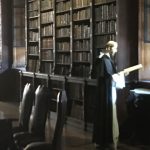 things worse, we were all thirsty and couldn’t have the time to stop and buy some water. 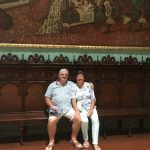 quietly sitting in the monestry

quadrangle, at the top where there was water flowing; no doubt his feet were hot!!!!

Back on the coach and I am pleased to say there were bottles of water on our seats, we headed out to Miraflores, this is an up-market district of Lima and it’s on the beach and certainly more congenial.

Our next stop was a private town house built at the start of the 20th century. We are not too sure why we went 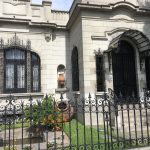 there but they made us welcome and gave us a couple of “Pisco Sour’s” to drink, very nice, and a few Canapés. 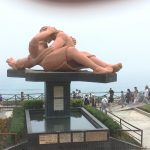 Modern statue of the kiss

view this “Statute” of a couple, well we think, kissing.

When we did our trip to Galapagos in 2013 we spent a couple of night in Miraflores but things looked different now.

Back to the ship at the end of our tour and when we arrived we were just in time for afternoon tea, finger sandwiches, dainty cakes and scones with lashings of cream and jam; lovely.

When we took stock of our day but we weren’t very impressed; we would have loved to spend more time in and around the Historic town instead of heading to Miraflores, to visit a house of no real significance, and a statute that meant nothing to us. To make things worse, we also found out that there had been a free shuttle to the Historic town from the QV laid on, but not been told.

The Queen Victoria is moored in a very tight slot with a container ship at her stern and a box carrier at her bows, both at 90 degrees to her so we decided to watch the process of getting her out. We were waiting on the top deck when the commodore came over the tannoy and apologised that we were late leaving but the ship was held up because 1-passenger had not returned.   We waited and we waited and naturally we were all speculating as what will happen, do we go without him or what anyway about an hour later we cast off and eased out of our berth, very gingerly but well executed.

This evening, having indulged in afternoon tea, dinner was only a quick visit to the Buffet to tide us over ‘till breakfast.

Our evening show was a couple of acrobats, but with a difference. The girl was a classically trained Ballet Dancer, and the chap was an acrobat and when they got together they amalgamated their individual skills to produce this show. The show was entertaining but again, they were asked to fill ¾hr with an act that was really designed to last ½hr so in the middle we had a series of slides showing them doing hand stands all around the world; quite un-necessary. I think the production team should re-consider how to fill the ¾hr slot without extra time wasting, added padding.

Today we have another day at sea so we will follow the now well-practiced procedure of sun, pool, Jacuzzi and lecture, before getting ready for dinner.

This evening we had a full house on our table, the six of us all met in the bar before heading down to the Dining room together.   Tonight Christine and I were celebrating the completion of our house sale; we had already enjoyed a half bottle of Champaign in our cabin, we stopped off at the bar for a couple of Dry Martinis’ and we then enjoyed a bottle of Malbec with our dinner.

The show tonight was the singers and dancers of the ships theatre followed by a ventriloquist who doesn’t use a dummy. He gets a couple up from the audience, puts a sort of mask over their mouths, and with a pull string behind, opens and closes their false mouths, these folk are now the dummies. He was quiet amusing but we have seen this done before and better, still he had a good reception and he was entertaining.

On our return to our cabin we looked in at the “Golden Lion Pub” as Christine wanted to hear more R & B and Soul music whilst I enjoyed a couple of pints of Guinness, this was followed by bed.

Tomorrow we visit Manta in Ecuador