Marian and Russell arrived at 10.00am and we quickly went to Tesco for some fuel for the Generator and some food for us, we then had a coffee before Marian left, with a big bag of our washing, very grateful for that.
Entering the double locks at the entrance of the canal, we meandered 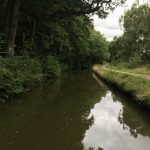 through a very quiet canal, with Russell 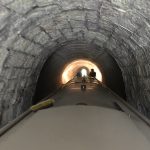 Going through the tunnel 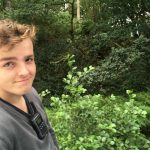 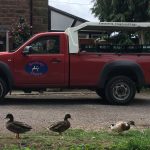 We spotted a milkman!

another pub, which took us about twenty minutes, so we were already for a pint or two…
when we got back we played UNO, which I am pleased to say I won.

Friday morning we had breakfast before starting again, this time we stopped for water, and the customary pooh, before moving on, we wanted to go to Uttoxeter, 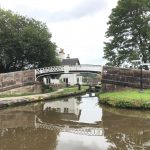 but sadly that arm of the canal has been closed, so we could only get to Leek, which we arrived at lunchtime. We were very disappointed as we are now in the middle of nowhere, with a twenty minute walk to Morrison’s and a lot longer to Leek itself. 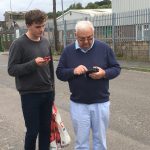 We walked to Morrison’s, did some shopping had a cream tea, then returned, and waited for Marian and Martin to arrive. After installing our new printer to our IPads,thank you Martin for coming to our rescue again! we went for a quick look at Leek, and a lovely curry. We finished the 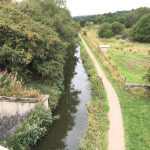 Looking over the aquaduct

evening back at the boat for coffees, before we were left on our own again.

Saturday morning, we were up and away before 8.00am, we decided an early start would complete our journey back to The Trent and Mersey Canal, we have to decide what we are doing, and where we are going, as so many canals are closing due to the lack of water. We arrived back at 1.30pm, had lunch, a lazy afternoon, and an early night.