Up with the lark and off to Cairo, see the Giza pyramids amongst other things, collected at 0445 by private car as we up-graded to “VIP” onto Egypt Air for the short flight to Cairo through the airport terminal and again collected by chauffeur driven car with our private guide. 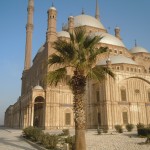 Firstly we went to the Citadel of Salah Al-Din and inside this walled area is the most famous mosque in Egypt but only built in the mid 19th century by a Turkish mercenary who became one of Egypt’s recent rulers called Mohamed Ali, yes same name as the boxer! Then onto one of the two official genuine Papayas makers where we were given a demonstration in the art of this most ancient form of paper making, it was very interesting as we were also shown how to identify the fakes that are sold about the streets: Here was our first purchase!
Next the main performance, we arrived at the Giza pyramids, Wow! 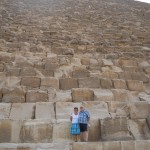 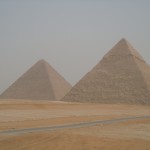 Apart from all the hustling that goes on by the vendors, they are really one of the 7 wonders of the world. I know it is a little late in our life to visit them but they were well worth waiting for. We spent a couple of hours walking around them then off to see the Sphinx, 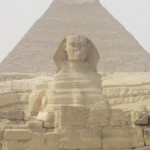 another magnificent colossal statue carved out of the rock. Our guide was very knowledgeable about Ancient Egyptian History as he had studied it at University; he completely lost us with all the facts, dates and dimensions etc
Next the included lunch next to the river Nile, we were looking forward to some local Egyptian restaurant with local food but no, to our surprise we arrived at a TGI Fridays; worse it was a dry TGI Fridays, no booze at all, huh! Food was OK, not their normal exciting menu, but as I said ok, but their service was nonexistent. Off to the Cairo Museum next. 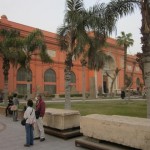 We only had two hours at the Museum, to complete a tour looking at everything would take about 2 years but we were pointed to the significant artefacts. It was very awe inspiring being amongst relics dating back 7,000 years to 5.000BC. The centre piece had to be the artefacts of Tutankhamun’s tomb, especially the solid gold head dress and coffins. Unfortunately we didn’t have time to go and see his mummified body, perhaps on another occasion; we did see some mummified animals though, fascinating!
We also saw the burnt out building of Mubarak’s ruling party’s headquarters, this was 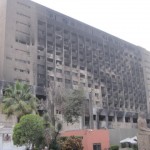 burnt out during the revolution, about a year ago now, we have to say there is no other sign of trouble here at all now.
Back to Cairo international airport, a good flight back to Sharm el Sheik private car back to the hotel and into the restaurant for a late dinner then bed after a very, very long but interesting day.
A day of rest and also our 7th anniversary, but unfortunately the day did not get off to a good start, I had not bought Christine a card, oh dear I am very sorry but this set the tone for the day! Still we had a full day around the pool, minimal wind but a lot of hot sun so we managed to get some colour into our skins. It is ages since we basked in sunshine, nice feeling.