We woke reasonably early and rang room service for our usual cupper but nothing, no nothing happened, no reply; oh dear, another failure to log in the ships questionnaire!!!

Christine didn’t kick-up much of a fuss so I know she’s not right yet. I left her in bed whilst I went down for the 0900hrs appointment with the medical centre only to be told it was Christine they wanted to see, “separated by a common language” eh! so back to collect Christine then back to the centre, this time they were too busy and suggested we went to breakfast and call back after, which we duly did.

Now at this point I am pleased to say Christine was much better, yesterday she couldn’t walk; today no problem, still we had to go to have the needle taken out of her arm, the one they put a drip through, (we don’t know what the technical term is for this) and have a final round of tests, I could see $$$$ signs floating in front of my eyes.

All good to go pronounced the Doctor, just take it easy; keep taking the medicine; no alcohol other than 1 glass of bubbly at midnight and come back if she has any further problems. Oh yes Mr. Page, just before you go the nurse calls, I have all the results of the various tests we have taken, “a wad full”, and your account. Now I am not sure if I mentioned this before, but whilst waiting in the Clinic another patient came out, looked at me and asked if I had plenty of money, he then turned to the nurse and said he would have to take a mortgage out on his house. Bearing this in mind I braced myself and took a look at the bill: good god, no way could I brace myself for this, the guy was right, a second mortgage may be necessary; wait for it, are you sitting down, fortunately I was. The total bill for 2 consultations, 2 hours in the private ward, a few pills and a couple drips etc., just under $3,000. Unreal or what? I suggested to Christine that if she has a re-lapse, I would shake it out of her!!!   Anyway, onwards and upwards, fresh air was called for.

I think this “jolt” improved Christine’s health no end, better than all the drugs taken and now felt well enough to venture into Bridgetown.

When we walked down the gangplank we were surprised to see 4 other cruise ships in the harbour. I always thought the places cruise ships visited, the local port authority organised and spread them, not have them all together as there would be too 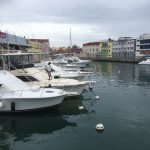 We used to bring the dinghy alongside here to get provisions etc., 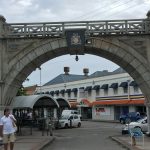 The bridge named after Bridgetown

dollars”. Still we walked the 2 Km to town, albeit with several rests and when we arrived at the harbor where the fishing boats and day trip boats as moored, we 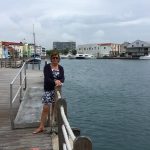 remembered all the times we used to motor up in our dinghy, and enjoy the local atmosphere; food; drink “Carib”, the local beer; numerous rum punches and Christmas at the Hilton Hotel: ah yes, the 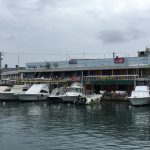 Many a Carib taken here

memories came flooding back and this contributed to Christine improving by the minute.

We walked over the bridge and sat down in the Harbour Bar, I 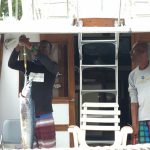 enjoyed a few Rum Punches whilst Christine did as she was told and enjoyed (I think!) sparkling water. We got talking to a Scottish couple from another cruise ship and what was meant as a one drink and rest stop took us past lunchtime and into mid afternoon. We were right on the waterfront and a fishing boat moored up, stern first and they proceeded to gut, skin and fillet these rather large Wahoo, These are large predatory tropical marine fish of the mackerel family, and prized as a game fish; no doubt they sold them to the local restaurant as “the catch of the day”, fascinating to watch. We then started the long meander back, stopping along the way to make a few family ‘phone calls. 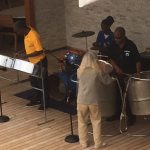 Bless she really enjoyed the music

We were back on board in time to put our feet up for an hour before the New Year’s Eve festivities begin.  To get us all in the mood, the ship had arranged for a  Caribbean steel band to come aboard and play for an hour by the pool; they were good and had a good reception at the end.  Whilst playing one or two got up to dance but one person in particular really went to town, she looked to be in her 90’s, she had long grey hair, she is always seen wearing gloves, though not tonight she was carrying them, no doubt all this exertion got her warm, anyway, well done her and good luck.

Firstly we ventured into the Martini bar, this had much of the ceiling covered with balloons: someone had done a lot of puffing!!!!!   We then headed to the Grand Dining Room where we met up with the couple we shared a taxi/van when we went to Antigua. The Dining room not only had balloons everywhere but we were all presented with a garland and a hat to get us into the festive mood. The four of us shared a table and had a great evening and I have to say yet again, the 68 Chefs on board surpassed themselves.

Following the meal we headed to the Sirena lounge to listen to the stand up comedian, though American, he didn’t just make jokes for the American contingent; he appealed to everyone though there were a number of risky topics which may have caused a little offence to some, but he didn’t seem to care, on he went and the audience loved it. It also transpires this comic, Tom Drake, is married to our cruise director Dotty Kulasa. 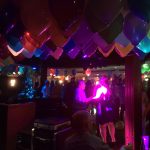 After the show we headed up to Horizons Lounge where there 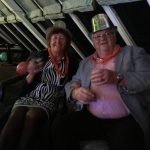 Great time was had by all.

there was a lively party going on; more balloons everywhere; music; bar rushed off their feet and the countdown to midnight called by the captain. It turned 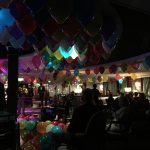 out to be an excellent New Year Year’s Party.

Tomorrow we go to Tobago.

This entry was posted in Barbados. Bookmark the permalink.