Up at the crack of dawn, not sure why, but every time we moved the boat went bang, so we are obviously on a rock or something, we decided to move off, (7am)and have breakfast later. We are now on Shropshire Union Canal, and with no locks, I was able to catch up with the washing, my machine has died altogether, not really surprised, it’s been a pain, one day it would work the next nothing, one day it would go through the whole program, next only half of it, I was beginning to think it was me, but now I know it’s the machine, hopefully we can get 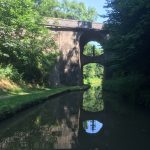 it sorted when we get to Chester.
We stopped at Wheaton Aston Lock, took on water, and did the 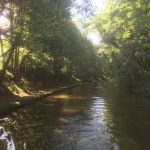 Just enough for a boat to pass

rubbish and of course the Pooh! Whilst we were filling up we had breakfast, before moving off. We did 22 miles with just one lock, we then came to Woodseaves Cutting where it is very narrow, and not always room to pass, and of course we met two other boats. The deep rock cutting was cut entirely by men without powered machines, very impressive. After the cut, we came to the five Tyrley Locks, where we made our descent towards Market Drayton and stop for the night.
No rush today, we left about 9.00am after breakfast, we did about four miles, before doing the Adderley Locks only five and for once very easy, maybe I am getting fitter. We stopped for the night.
Next day we set off to do the next lot of locks, we decided to travel three miles to the bottom lock of the 15 Audlem flight, we did the first two locks, then stopped to watch the F1 qualifier at Silverstone, Hamilton is on pole, should be a good race, the England game was on, so we decided to do a few locks while it was quiet, we did another 11 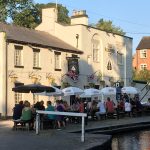 Pub on canal side at Audlam

before stopping at Audlem. A couple who were coming up, left most of the gates open, so we had quite an easy trip down.
Audlem was hosting a “Party in the Park” so we tried to get tickets, but sadly they were all sold, never mind, we stopped and had a drink at the bar on the canal, which had a mock up of a narrowboat as the bar, we then walked all around the 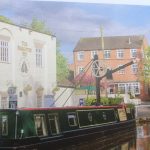 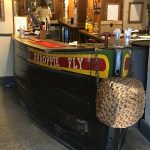 The bar inside the pub

tiny village, and where ever you went you could hear the music, which sounded quite good. It was a very tiny 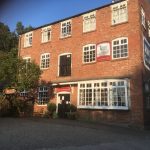 village, yet they sold 3000 tickets! There was a massive 15th century 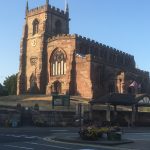 church set on a hill, it looked very splendid. We walked back to the bar had another pint, then went back to Meg. The music stopped before 11.pm so we were able to get our beauty sleep.
Next morning we were off to Nantwich, we had the last of the flight (2 Locks) to do, number one was easy, but there was a queue at the second, as everyone was leaving from the party, we were fourth in line, plus others were coming up, I went to help on the locks, we got three boats through, everyone was helping, then it was our turn, well everyone had left, accept the one waiting behind me, I started the lock, then asked the guy if he would help me, well the man just lost it, he was a nutter, there were other people around, who listened to him ranting and raving, and just didn’t understand what his problem was, anyway, eventually I finished the lock and we moved on, but he was a nasty piece of work.
We travelled onto Nantwich where we stopped, we were very nervous as we knew the other boat was following us, he was quite scary, we also think he had been drinking, anyway we stopped, and he passed us, with no problems. We then settled down to watch the Grand Prix, which was very exciting. 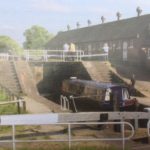 From Nantwich we travelled onto Banbury, where there is a two staircase lock, which required a bit of thought, especially as someone was coming in at the bottom as two boats were coming down, I shouted at them, and she said it’s ok, we are used to doing this. They called it the Bunbury shuffle, so another different experience. We travelled onto Rowton Moor, not much here, but we did find a nice pub where 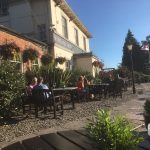 Geoff enjoyed a couple of pints, tomorrow we will be in Chester.