Whilst we were wandering around Brentford I noticed a historical plaque in the lock area and after reading it I was surprised what has taken place in Brentford in the past.

Brentford has been a familiar area to the west of London to most of us, and probably this is an area few of us have visited other than passing through, as indeed have I, yet unbelievably this place has a formable history.

The archaeological objects found in this area go back to the Bronze Age, long before London was started. Brentford being the confluence of the rivers Brent and Thames and sufficiently up stream was shallow enough for people to walk across. This was also the place where Julius Caesar and his army battled a Celtic Chief by the name of Cassivellaunus at the start of the roman conquest, 54BC. It didn’t end there; in 1012 Edmond Ironside (King of England) defeated the Danes and it still doesn’t end there, in 1642, another “Battle of Brentford” was fought, this time between the Royalists and the Roundheads and the result of this defeat ensured Royalists never got back into London. Probably the last and significant point of interest was the starting of the Grand Union Canal, here in Brentford.

The beauty of travelling at a steady pace of around 3 miles per hour is you have time to register parts of England you would normally just bypass, our history, our heritage, and the beautiful countryside.

Leaving Teddington after a comfortable night we headed west. We certainly weren’t in any hurry and our target was to reach Hampton Court; this is where we had agreed to meet Christine’s friend, Jane. We were very lucky to get a mooring alongside Hampton Court, a 10-minute walk from the Station. 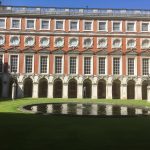 The old village (again bypassed) was a very quaint narrow street, lined with antique shops and restaurants; naturally we couldn’t let the moment pass so enjoyed a super leisurely lunch at Zizzi’s.

Next Day Jane arrived and the afternoon was taken up by a visit to Hampton Court Palace; the Palace Henry 8th confiscated from 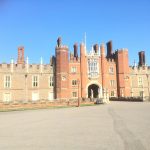 Entrance to Hampton Court, we were moored very close

Cardinal Wolsey. All of us had visited the palace in years gone by so decided it was time we re-visited it. We all had a wonderful afternoon, I enjoyed the history and the girls enjoyed the ambience and the gardens. 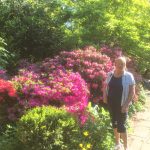 Jane and I went in the Maze, which was fun to try and get out.

We were away at a leisurely hour the following morning heading for Windsor; we had decided that by Monday the crowd would have gone and we would be able to moor by the bridge, as we did the last time we were there. 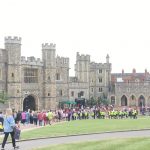 Windsor Castle, such a lovely place

Yes, we were lucky, our space was waiting and we arrived in time for us to visit the Castle and grounds. Fortunately the queue wasn’t too long to get tickets so joined it. Ha Ha, once inside the queue snaked around the big “room” in the time old tradition until we paid for our tickets, great, but no, now we queued to go through security, very similar to an airport, everything in a tray, belts off, but this time, hands in the air!!!!! 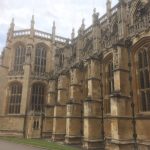 About an hour later we were in, all we now had to do was collect our audio guides and we were off, well, once we managed to sort the audio guides out that is.   We walked in the right direction to find the first number, which we did but couldn’t get the audios to work so we kept walking and eventually found a castle worker driving a golf cart full of returned audio sets, so 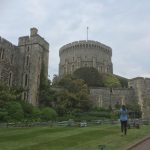 Round Tower at Windsor

we stopped her. She agreed mine didn’t work and replaced it, Christine couldn’t get the a picture on her and the reason was it was pre-set for a blind person and Jane, well I’m afraid to say was operator error. Now we were off, and our priority was to visit St. Georges Chapel; the girls wanted to see all the flowers, only to be disappointed, they had been removed and when we enquired, were told they had been removed and distributed to hospices and the like, at this point all was satisfied. 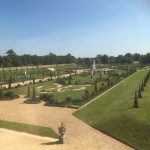 Visiting the castle, and in particular St. Georges Chapel 2 days after Prince Harry’s wedding to Meghan Markel was good, as we could relate to the television pictures.

Again, I was more interested in the 2000-year history of the castle but this all fell upon deaf ears, as far as the girls were concerned!!!

The following day we continued the tourist bit but before this, 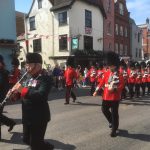 Changing of the guard at Windsor

Christine and Jane walked across the pedestrian bridge into Eton, I think there was a bit of voyeurism, they wanted to see the boys dressed in their school uniforms, i.e. their morning suits. Back to the boat and we all trooped up the hill to get a good spot outside the Castle main entrance to watch the troops 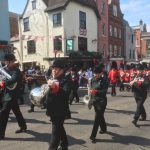 marching up the street with the band, and then into the castle for the changing of the guard ceremony.

Back to “Meg” heading up the Thames passing many very expensive riverside pads until we arrived at “Bray Lock”; in we went, no problem, well not with us. The hydraulic pipe controlling the lower lock gates split and the gates couldn’t be closed and after a ‘phone call by the lock keeper to their control centre, we were informed it would be a couple of hours before an engineer arrived to replace the hydraulic pipe, oh dear, so we broke out the wine bottle.

The engineer did a magnificent job and we were on our way well under the two hours forecast, this was good but meant we had to rush our wine!!!! Now time was marching on so stopped just before Isambard Kingdom Brunel’s magnificent “Maidenhead railway bridge”. This is the bridge that was predicted to fall down when the first train rolled over it in 1839. The reason for this gloomy forecast was the 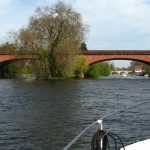 construction was revolutionary; the spans were far too wide and flat for traditional engineers of the day. Here we are, 179-years later moored just by it watching today’s trains run over it and it is as solid now as it was then.

We spent a quiet evening waiting for a knock on the roof asking for the mooring fees mentioned on a sign on the bank, but no one turned up and when we left the following morning heading for Marlow, still no one had come, a bonus to us!!!