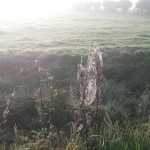 Woke up to thick fog, we were going to start early again, but we delayed a bit, but still headed off, through the fog, it was very eerie, and so very pretty with the dew on the grass, sunshine trying to break through. We 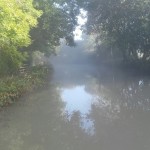 stopped again for water, had poached eggs for breakfast whilst the tank was filling up, then started again. By which time the sun had burnt all the fog off. 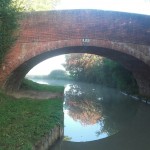 What a fabulous day we have been so lucky with the weather, we did nine locks, six of them were a flight at Napton, we did twelve miles altogether, and decided to stop where we had turned right, where the canal split, either going to Coventry or London, we chose London. We are now on the Grand Union Canal, where the locks are bigger. So we will face that tomorrow. 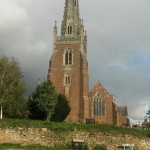 We stopped at Braunston, at a pub, would you believe, we walked up to the Town, which was a typical Northampton village with the stone walls everywhere. The church is huge and can be seen from a long way away, massive tall spire. Also in the village was an old mill, which is no longer working. We couldn’t get passed the pub, as it started raining, so we called in for a quick half, or in Geoff’s case a pint. 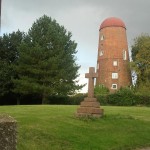 When we came out, it had stopped again, so we headed back to the other pub to have a meal, I fancied steak, Geoff had a mixed grill, naughty naughty, starving tomorrow. They had an offer on, two main meals for the cost of one, can’t be bad. Geoff had a disappointing role poly, when the guy asked him if he enjoyed it, he said No, so they didn’t charge him! Apparently a lot of people have complained, it was nothing like the original roly poly, more a sponge with jam in.

Early night I am shattered.