We wanted to stop in Bourne End, just because Liz lived there, I wanted to go back to the pub that we frequented whilst she was alive, when we arrived at the jetty, it was very chaotic with boats moored badly, we arrived at the same time as another boat, and the way everyone was parked neither of us would get in, but after some shuffling around, we were all tied up, ready for the pub. 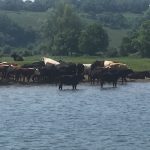 Cows grazing in water, so peaceful

It was another beautiful day, so we strolled along the country road, after crossing the local railway line, and then found a table outside, Jane and I enjoyed a cider, whilst Geoff had a pint of the local beer, we all had bacon and mozzarella rolls, which were delicious, a couple more drinks before back to the boat and onto Marlow.

We couldn’t berth in our normal place, so found one further down, the good news was it was free, we had showers and headed for town, ready for a meal at Zizzi’s (Jane’s treat)not sure why she did, as we were forever nagging at her to either stop smoking, or get out of our way, bless her! I have so enjoyed seeing her.

After a lovely meal, we strolled home, a couple of drinks, before bed, what a lovely day.

Marlow, and it’s been raining, the first time, since Jane has been aboard, we have been so lucky, Jane is catching the 11.00am train, bit of a drag to get back to Petersfield, she has three changes! That’s the only downside to joining us on the boat, you never know where we are going to end up, still we found the local station, a tiny two carriage train, to go to Maidstone, then onto Reading, and finally Petersfield, sorry mate!
We walked around the town looking for odds and ends, and buying a few groceries, to keep us going.
Back to the boat, and onto Henley, when we arrived, we found they are 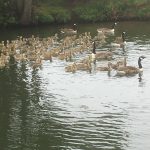 Can’t believe the number of babies

preparing for the Henley Regatta, bit early we thought it doesn’t start till July, but apparently it has become so popular it takes two months to set up. We struggled to find a place to moor, so we went to the bridge, and then turned back to go further out. We ended up on a bank, away from Henley, it started to thunder and lightning, pour with rain, so we decided just to stay put, and worry about it the morning. We couldn’t get any television, so we played cards all night, tomorrow is another day.