We arrived in Belize, formally British Honduras, early in the morning. This small country measuring 174 miles long x 62 miles wide, with a population of 62,000, lies between Mexico to the north and Guatemala to the south and west.

Belize City, situated at the mouth of the Belize River, can’t accommodate Cruise Ships, and with a lot of coral around, meant we anchored 4 miles off the coast and tendered in.   On this occasion though, the tenders were supplied by the port 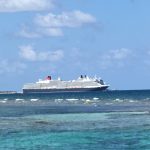 At anchor the Queen Victoria

authority, they were certainly much bigger, defiantly quicker, and probably more robust as the sea, though beautifully clear and warm, was a little on the rough side.

After all the tours had left the ship, it was our turn, the independent passengers. Being fairly large tenders and first on, we waited quite a long time for the boat to fill up, in fact we waited longer for the boat to fill than it took to cover the 4 miles; maybe the smaller tenders would have been better. Also at Anchor was a monster “Carnival” cruise ship, probably around 5,000 passengers so we knew the port would be busy. 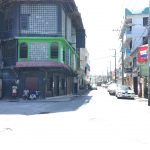 Some of the poor buildings

Our two main objectives today were to have a good look round and get the feel of the city and to find a suitable Internet place.

The Maya Civilisation, between 250 and 900 AD, originally inhabited this area of Central America and there are remains of magnificent ceremonial cities, pyramids, temples, and palaces however, by the time the Spanish arrived early in the 16th century, the Maya empire had collapsed.

Wandering around this “City”, and it’s certainly not how we would describe a city, but interesting none none-the-less, we firstly had to be very careful not to fall down a drain hole, they were big and everywhere. The streets and local “scenery” was very much the same as many of the Caribbean Islands we have visited in the past though they had a very big and modern museum, quite out of keeping. Anyway we found a rather nice bar and restaurant that had Wi Fi so we had a couple of coffee’s and refreshments, including those calorie reducing sweets whilst Christine sorted her pictures for the web site and I caught up to date.

We now wandered back along a torturous route to the riverside area where there were bars, shops, loud music and heaving with 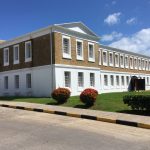 the “contents” of two cruise ships. It was a beautiful and very hot day so a couple of rum punches was 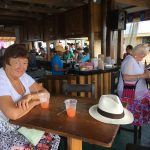 called for which we enjoyed sitting alongside the river watching the boats coming and going.

Belize was the home of many British Pirates raiding the Spanish but when the treasure trade evaporated these people became “loggers”. The first settlers, nicknamed the Baymen, appeared in 1638 and the legend has it that the City was built on Mahogany chips, loose coral and rum bottles. Conflicts between the British and the Spaniards were common place until a large Spanish fleet was finally defeated at the “Battle of St. George’s Caye’ in 1798. It was in 1862 the colony became known as British Honduras and it changed to Belize during the independence process with full independence being granted in1981.

Back on board after another 4-mile tender journey and a slow preparation for dinner, smart casual tonight.

Speaking to our friends who went on the river tour, we think we dropped a clanger as they thought their tour was one of their best they have done on this cruise; oh dear, we cant win them all. 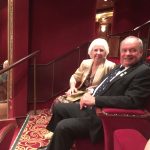 Eileen and Dave with us at the theatre

The show tonight was a pianist and he certainly hammered the keys playing all sorts of music, classical to rock with everything in-between. His finale was to ask the Audience to shout out what music they would like to hear; he had a list of about 20 pieces of music and he played a composite of bits of each and every tune he had on his list including Rule Britannia and Land of hope and glory. I found him entertaining but his skills were not quite of a classical nature!!! Christine on the other hand found the show boring and nearly fell asleep. 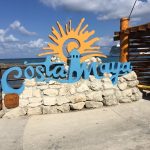 Today we arrived in Costa Maya, Mexico, and have booked a Catamaran and snorkelling tour, but as it doesn’t start ‘till 1230 so we weren’t in any hurry. 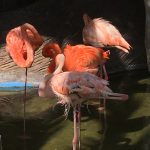 Such a lovely place to visit

What I have forgotten to mention is there have been several outbreaks of a stomach vires recently and slowly the ship has been clamping down on things we used to take for granted like helping ourselves at the buffet, using the cruet pots on the table, helping ourselves to tea and coffee from the machines etc., etc., but with this up-surge in cleanliness everything has to be dished out, even to small salt packets as the cruet sets have all been removed. There is also much more evidence of the ships crew cleaning down bannisters, chairs even to the 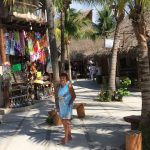 Walking round the lovely port area

extent of removing all the ‘photos in the ‘photo gallery. If you want to see a ‘photo taken by the ships photographer, you need to put on a pair of rubber gloves and operate a computer terminal to see it on line. To be fair, the Cunard Commodore is taking this outbreak very seriously, though only 3% of the complement has suffered; still life continues and we are all enjoying 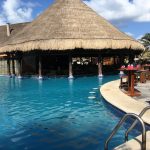 In the port area

Costa Maya follows much of the same history as the rest of the region, Ancient Civilisations, Spanish colonists, British 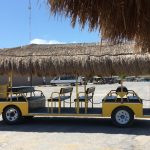 Pirates etc.   We on the other hand were just tourists so went on a tour, we left the dock on a trailer contraption pulled by a 4 x 4 pickup that took us to the quay where our catamaran was waiting. 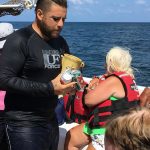 Our guide on the snorkel trip

were going to snorkel on. This coral reef is the second largest in the world, the first being the Great Barrier Reef. This reef runs for 2,000-Kms and in places are 38-Kms wide though we only enjoyed a small part of this reef.   We were snorkelling around for about an hour, but were a little upset as the numbers of 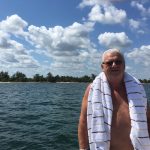 After our swim on boat

fish we saw was limited; still the water was warm and we enjoyed ourselves.

The journey back was a laugh, the beer for those who wanted it was flowing, the chap in charge of entertainment had a couple of tricks with a “Conch” and a Sword”, balancing them on his chin.

Back on shore, a taxi ride back to the terminal and a mooch 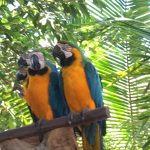 In the port area

around the shops before joining the ship.

After another enjoyable dinner with our companions we hit the theatre. Tonight the Queen Victoria Theatre band was joined by the Queens room band “and” by the string quartet as well as the harpist. This combined orchestra accompanied then 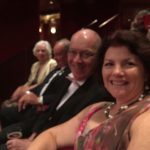 Debbie and Paul at the theatre

accompanied the Queen Victoria singers who performed all sorts of songs, finishing with a medley of James Bond theme tunes.  Many people enjoyed them put a number fell asleep!!!!! At the end we all departed back to our cabins and to bed, as we were all knackered, again!!!

Tomorrow we have another sea day.