We must have tired the dogs out, they gave me a lie-in, we went for our normal walk, then Geoff went to get some croissants in the village, (we really are being naughty now), very enjoyable.

I have been trying to do the internet, to get the logs posted, very difficult around here, as no internet café, or Wi-Fi around, so decided to use dongle, which is expensive because of the roaming, so have almost caught up to-date, but need to get photos on, will have another go later.

It is very windy here at present, we cannot have our awning out, or some of the windows open, and we were a bit worried about travelling on the bikes, but we decided to go for it. 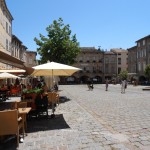 Bagnols-S-Céze is only 7km away, and although at times we were being blown sideways, we made it ok. We walked around, and found this fantastic old fashioned butcher (Boucherie) they sold everything, we bought some steak, pork chops, kidneys, brawn, and pâté, as we are determined not to starve over the next few days.

We wondered all around, they had lots of side streets, with 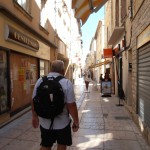 little shops and cafés, a couple of squares, with people just meandering around, another lovely town. We stopped for a couple of beers, and then headed back to camp, trying to avoid being blown off our bikes by the gusts of wind.

We had a quick lunch of the duck pâté and the brawn,( not quite like my Mum used to make) but similar, then we started the job of packing up again, I went and cleaned Pinky, before she was loaded on the trailer, Geoff had done his yesterday. Whilst Geoff was doing the bikes, a French man was talking to him, and they were getting on quite well together, speaking in French, so he must be improving. 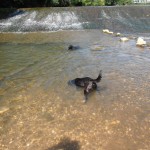 All jobs done, back to the river for the last swim, lots of people around, and Sooty showed off his party piece, but this time he swam under water, but forgot to breathe, so looked very startled when he came up. Once again he started transferring 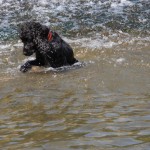 Sooty is down there somewhere!

all the stones, and kept the children on the riverbank amused.

We moved further down where the weir was overflowing, and Bella thought she would try and come down the river, suddenly she got swept away, fortunately Geoff was further down, and managed to drag her by her ear to safety, we thought at that point it was time to come away.

Back at home, we opened a bottle of special French wine, we had bought when we were with Catriona and Mike, and settled down to a the steaks we had bought earlier, not a patch on our restaurant in Spain (Gallego’s) but a good second, and an end to another lovely day.