Before setting off at a leisurely pace this morning we brought in all the fenders including the thick ropes around the bows and stern as the last locks before we arrive back on the Shropshire canal are narrow, especially No 1 lock.   This one has one of the walls collapsing inwards, and a boat will get stuck if it has any fenders fitted. The CRT have 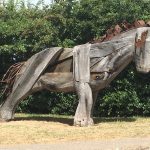 One of the carvings

already published a programme of repairs for these locks at the end of the summer; lets hope they last that long!!!!! With the problems at these locks and the amount of traffic going through, a CRT volunteer mans each lock, so with Christine and other boater’s crew, we went through them in a flash. Out of the locks at Hurleston Junction, we turned south and headed towards Nantwich, a full 3-miles away where tomorrow we will be picking Pat up.

Nantwich has supplied rings and visitor moorings sending out a clear 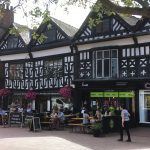 message that boaters are welcome, unfortunately not every town does that.   Firstly we walked to the train station to find where we had to meet Pat tomorrow and then we meandered around this very quaint Cheshire market town, with numerous buildings not too dissimilar to Chester. In fact there are no fewer than 132 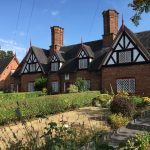 The origins of this settlement date back to roman times when salt was discovered, and salt has been the mainstay of the local 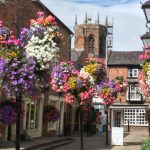 So many floral arrangements

economy ever since.   It reached its peak in the 16th century when there were around 400 salt houses 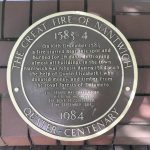 but by the end of the 18th Century it had almost died out, and the last salt house closed in the mid 19th century.

Apart from the Canal, there is also the river Weaver that passes through here, and on its banks is a plaque commemorating the great fire of Nantwich 1583-4 and the fact Queen Elizabeth 1st personally donated money and wood from the local royal forests to re-build Nantwich. Like many other towns around the UK, there is a treasure trove of information that we seldom get a chance to 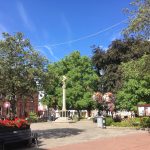 enjoy, like St. Mary’s Church in the centre, recorded in England’s 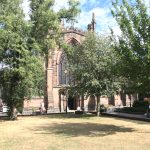 Heritage list and is a grade 1 listed building. It dates from the 14th century, though it needed some major remedial work to stop in sinking due to the removal of salt through the yeas. Apart from a place of worship, during the English civil war St. Mary’s was used as a prisoner of war jail for Royalist troops. 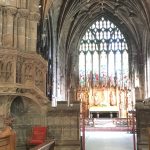 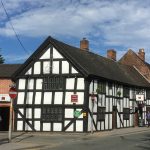 The Cheshire cat, a very old pub we were drawn into for the obligatory pint, built in 1637 it is also a Grade II listed building though when built originally, it was just a couple of cottages. In 1676 a benefactor converted them into widows’ almshouses. Apparently over the years 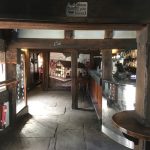 Inside the Cheshire Cat pub

this building has been many things but now it is a pub and at the back they have built a restaurant and a new 11-bespoke bedroom hotel; The real ale they served was in keeping with the bar area!!!

Pat duly arrived around lunchtime, so this gave us enough time to visit Morrison’s to stock the larder and on the 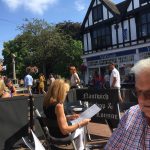 way back stopped for a coffee at thriving business. It was a combined bookshop and coffee house; they also did food. The combination certainly worked, it was heaving and certainly made a change from the Costa’s of this world. To add to experience, it was situated in another listed building with wonky floors, exposed 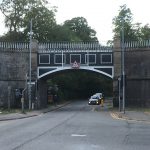 Canal Aquaduct over the main road

All aboard and we were off, heading south arriving at Audlem in time for a couple of pints before dinner at the Shroppie Fly.