Up bright and early, as we have a lot of locks to do, plus miles, we left at 7.30am and Pat and I did 13 locks before breakfast, we didn’t stop all day, we had breakfast and lunch in shifts, we are trying to get Pat to 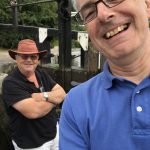 Geoff and Martin having a joke together 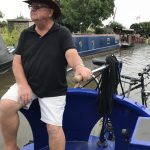 miles, no wonder we were shattered, we played Phase 10 and had an early night.
Again today we were up and out early, we wanted to stop going back, and start a new canal, so after 10 miles we were at Autherley Junction, so we could now head north again, this time on the Staffordshire and Worcestershire Canal, we again did a total of 18 miles and four locks, another early night, after playing Phase 10 again. 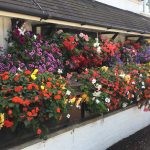 Wow, what a garden!

We left early again today, as we were trying to beat a boat with a butty, who would have held us up, we passed him before he had started,it was difficult trying to pass him yesterday. Today it rained, we got soaked, Geoff did most of the driving, and we 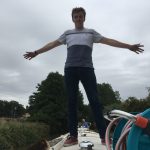 Russell do his Titanic

arrived at the junction of Great Haywood, ready to start again tomorrow.
Marian, Martin, and Russell arrived at 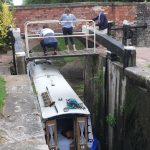 10.00am, Marian took the car to Stone, and then cycled the eight or nine miles back to meet us, we stopped for a quick drink at pub, enjoyed bacon butties, before heading to Stone, nice to have more helpers to do the locks. We 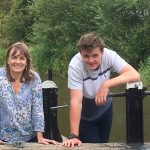 arrived about 4pm quick change and a cuppa, before having a lovely Italian Meal, a couple of whiskies on board, before Marian drove home. A lovely day with the family.