We have two whole days at sea, so today we decided to finish un-packing, or at least tidy up, we went for a swim before breakfast, then changed, and had a late breakfast, followed by coffee, which Geoff had to try out his booze package card, for brandies, yes it works!
We booked our trips for Aruba, then did some more exploring, this is a lovely ship, plenty of seating areas, we had no problem finding a seat by the pool, in fact Geoff had a couple of cocktails, whilst I enjoyed an ice cream. I need to do some ironing, so the next trip was to find the launderette, yes we can do our washing on board, very civilised, I had to hand wash on the Norwegian. All jobs complete, we went to the quiz, we met a couple of Americans, who said we could share their seats, this was trivial quiz, and guess what we won, so the Alcoholics still have it! We won a plastic water container each, didn’t we do well. It was good news having the Americans, cos we had a mixture of questions, and the questions on America they answered.
We left there, changed for dinner, had a drink beforehand, went to the show, which was excellent again, had dinner, went to another quiz, this one was on sixty Mystics, we didn’t win, but think we came third, so not too bad, we named all the tunes, but missed out on the artists. We listened to the Rock and roll, but Jan and I are feeling queasy, we think it’s motion sickness, cos a bit rough, so an early night was had by all.

We had to put the clocks on another hour last night, so we are now 6 hours behind UK, so instead of 7.30am swim we went at 8.30am. It was really fun in the pool as the seas are rough, so we have our own wave machine, it was hard swimming, against the waves, but a lot of fun, we had a jacuzzi, then upstairs change for breakfast.
They had a film on the History of the Panama Canal, it was very interesting, we then had coffee and Geoff had his brandies. Today they have a themed UK pub lunch, which we made the mistake of going too, Geoff and I had a ploughman’s the trouble is we have an early dinner tonight, oh well, never mind.
Tonight is formal night, so out came the dresses, and guess what, one the zip has got jammed so couldn’t wear that, the other I was all lumps and bumps, and the skirt was too tight, so really fed up, fortunately I had my new dress and jackets so I wore that, shame cos I was looking forward to wearing long. Anyway I felt ok in what I had on.
We had an early dinner, which was a special menu, as they were celebrating 50 years of Princess cruises, so instead of the normal three courses they wanted to give us five courses, I missed one of the starters off, but Geoff managed his, fortunately we had fish so not too heavy, we could have had steak! Anyway we have decided it’s time to cut back a bit.
After dinner the Captain introduced himself, and his top men, and very friendly they all seemed. They had a champagne fountain, which we couldn’t get near, but they were very concerned with it, because it was so rough, anyway it worked, and it was very effective.
Next was the show, which was brilliant, they had a comedian who could certainly play the piano, he could play, sing, and tell very funny stories, another good night.
We decided to have an early night as tomorrow we have a very early start, as we are going to Aruba. 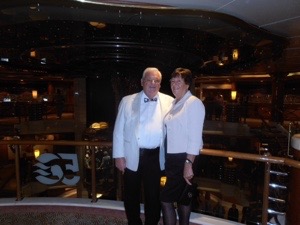 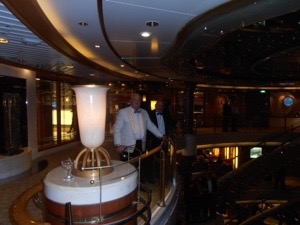