Up early and breakfast at 6.45am, the breakfast room was full, everyone wanting to get ashore. We docked at 6.30am and by 7,00am we were ashore. We are going on a 4wd excursion today, we met our guide,and left on a coach, we then had to sign a disclaimer, before we were assigned to a land rover defender, with seats at the back.
There were six vehicles, and they all had their pecking order, we started off fourth, although we did go up to second later. We headed north, and onto the coastal road, which was no more than a rough track, we came to Casibari, these dramatic formations are shaped by boulders, some the size of small houses and weighing several tons. Arawak Indians would visit in order to bear incoming thunderstorms and draw on the rocks. We walked up to the top, where there was a stunning view, we could even see the cruise ship in the distance.
Back into the jeep, we continued on the coastal road, the Atlantic was very rough, and crashing onto the rocks, it was fantastic, we stopped many times, to look at the sea crashing onto the rocks, then onto the site of the original natural bridge, which fell into the sea in 2005, but the smaller bridge remains still, which we travelled on to see.
We did a lot of off roading, and were taken to the gold mine, no longer working, as too expensive, also on the beach years ago the fishermen used to place 7 stones on top of one another if they had found a good fishing spot, these days many people do it, apparently it is for good luck, the beach was full of them, the fisherman would certainly not know which was a good spot now.
Back in the jeep, more off roading, and in the middle of nowhere we came across a church, which ahead been built many years ago, and restored by a teacher in the 60’s.
Next step was the California Lighthouse, perched on a high elevation and named after the steamship California, which sunk off the coast of Aruba, this lighthouse was built in 1910, and offers stunning views of the island and coastline. At present it is being renovated, and it is hoped that it will be finished by next year. Close to the lighthouse, is a fabulous Italian Restaurant, where you can watch the sunset, sadly we didn’t have time to eat there, although we caught up on our emails.
Aruba is famous for gorgeous, palm tree lined white sandy beaches which are home to calm clear waters, making them perfect locations for swimming, snorkelling and sunbathing which we did. The Caribbean waters were lovely, we thoroughly enjoyed our swim.
We headed back to the ship, in time for lunch which we took in the Provence Restaurant, it was very good.
The rest of the day we spent down by the pool, watching Skyfall, they have an outside screen on deck, which is very large, we had mojitos and Piña colada, took a swim, and a jacuzzi, very decadent.
Later we went to the show to watch the ventriloquist, he was very good, he could throw his voice, he was very funny, better than we thought.
After the show we played dominoes, and managed to beat the boys again.
Back on deck, they had “party night” dancing under the stars, good fun, although you can tell we are getting old, as I wanted to go to bed at 11pm, which we did, still we were up at 6am! 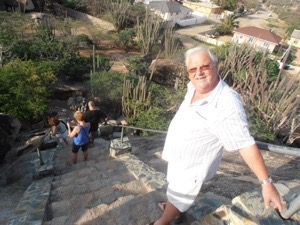 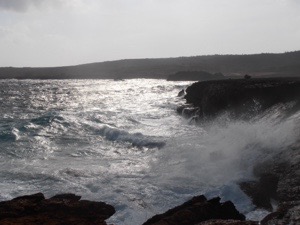 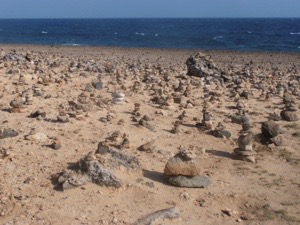 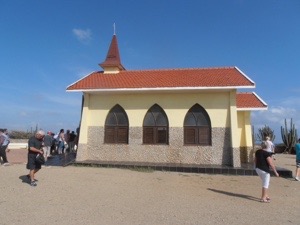 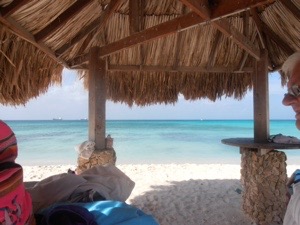 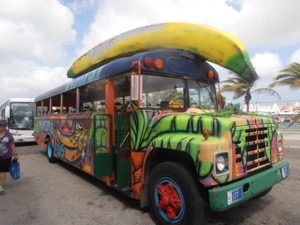 This entry was posted in Aruba. Bookmark the permalink.