Around the Horn 23rd February

Oh dear, here we go again, alarm went off at 0545hrs so that we didn’t miss going around “The Horn”; yes, that infamous place at the bottom of the world, the scourge of many a mariner, fortunately being in a 90,000 ton ship we were OK!

The captain was very good, we just didn’t sail past it as we travelled south, he turned West into the pacific and round the island of Cape Horn to where the most “Southerly lighthouse” in the world is supposed to be situated, however there are several claiming that honour!!! This lighthouse, it is also a navel base, is still a maned lighthouse and it is always a family who stop there for 6 Months, apparently the pay is 300 times more than normal as it is so isolated.

Trying to understand the exact history of this place seems a little vague. Apparently Captains: Sir Francis Drake and Francisco de Hoces sailed here back in the 1500s but it was not ’till the 17th Century that this Cape was successfully navigated by two Dutchmen who came from the town of Hoorn and one of their ships was also called the “Hoorn” (though this caught fire and had to be abandon) hence the name “Cape Horn”. This route was regularly used until the Panama Canal opened in 1914. The other strange fact is that it took another 200 years before Antarctica was discovered. 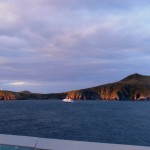 After 2 hours looking and photographing this place, we turned and headed due south towards Antarctica, good, after all this was the main attraction of this cruise. Breakfast at 0800hrs then a leisurely morning, reading and playing Crib followed by a light lunch as tonight is our second formal evening where the posh frocks and DJ’s get aired! During the afternoon we attended a lecture about the Horn and our route into Antarctica, this was followed by a stupid but very entertaining game show with participating guests to represent USA V Rest of the World, as I said, very entertaining.

Afternoon tea followed with cakes, oh dear the weight still goes on, before we went down to our stateroom for shower and dress.

The show tonight was, again excellent, the singers of the Celebrity Infinity sang and danced to 70’s music non stop for one hour. Not only was it a very slick show with lots of changes, the costumes were also 70’s with flares, hot pants, white boots etc, etc. at the end of this show it was announced that this theme would continue up in the Constellation lounge or the ships night club after dark.

Tonight we all strutted about in our finery though decided to eat in the main dining room, we have a table booked for tomorrow in the USS United States, didn’t want to go there on consecutive nights. Again first class food, cooked to perfection, how do they do so many meals so well, quite amazing.

After dinner we went up to the night club to watch the continuation of the 70’s show, but half way through it we came over all tired; probably a combination of too much food, too much alcohol, too little exercise and too much relaxing.

Tomorrow is Antarctica day, should be very exciting.