Lovely sunny day, so we thought we would make the most of it by going to look at Arco, a medieval village, where we are staying.  We are on the outskirts of the village, so we took the bikes, parked them, and walked into the village. No traffic allowed 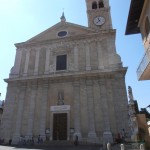 Such a big church for a small village

except push bikes, and there were loads of them around. 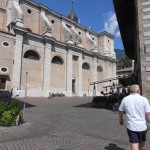 We entered the big square, with cafés on three sides, and the other one was taken up with the church, which was huge.  We wondered around the little alleyways, which is where the shops were, mostly had climbing gear in, it is one of the main activities away from the Lake. 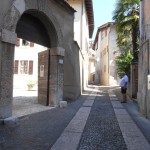 The tiny streets were fascinating, we found one that had a sign saying ‘ twenty minutes of step climbing to get to the castle’ at the top, we decided to give that a miss, they looked straight up, not sure that I would have made it, let alone Geoff.

It is difficult to describe, and the photos do not do it justice, but it is a very pretty village.

Back to the campsite, we had lunch, and then went for a swim in the lovely sized pool here, very deep, and not too crowded.

We took the dogs for a walk, and they enjoyed being back in the river, where do the days go too, they are just whizzing by.