Today is our penultimate day; tomorrow we disembark but fortunately the cruise ship’s itinerary has been considered carefully and we approached Rio at Midday, not at night as some cruise lines do. This must be up in the best “top ten” bays to 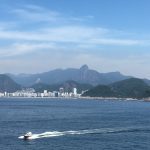 Pilot coming on board to guide us into Rio

sail into, firstly we could see the Copacabana beach in the 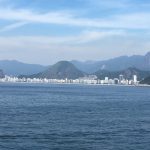 Copacabana beach in the distance

background then this was followed by the 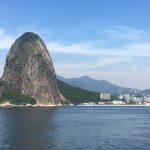 Sugar Loaf Mountain towering over us as we passed. In the distance we could see the 8-¼ mile Bridge, 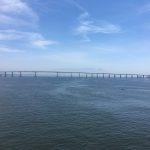 the “Ponte Presidente Costa e Silva”, it has 8 lanes and carries 140,000 cars a day and was opened in 1972.   Curiously, the Queen and The Duke of Edinburgh were here in on their only trip to Brazil and attended the symbolic start of construction back in 1968.

As we passed the Sugar Loaf we could see the Internal Airport, 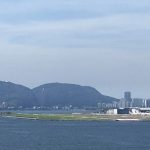 the one featured in the James Bond Film, “Moonraker”.  Next we passed their naval 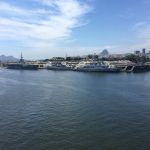 dockyard where there was what looked like an old WW2 carrier, it could still commissioned!!!!! We then passed the “Ilha Fiscal“, a former Palace 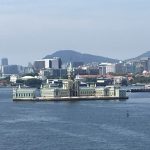 Posh party house this used to be, now a museum

but now a cultural museum.  As we approached the berth, we clocked the new “Museu do Amanhã”, Museum of Tomorrow, opened in 2015; a very impressive building right on the waterfront. This museum mixes Science with Innovative design to focus on sustainable cities. 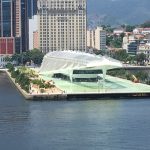 We were eventually moored behind a P and O Cruise ship that left soon after; perhaps the El Capitaine said something!!!!

We met Christina and David for our last lunch together, we even got to sit at the table the captain usually sits at, the waitress who was serving us was great, and we enjoyed a full three courses, not sure how we are going to do dinner tonight, still it is the last day.

We could have got off but decided not to, instead elected to get the rest of our packing completed. We had agreed to meet up with our Crib playing Canadian friends for dinner and a last few hands of Crib, as there is no “Showtime” aboard tonight, only a film, ugh! The cribbage challenge was Alvin and I against Christine and Laura and after numerous games and rubbers over many days we arrived at the end of the cruise even-Stevens; a fair result me thinks.