Our journey to Italy

6/2. Up early, sorted the house out, finished packing, and we were away after breakfast about 9ish, we said we wouldn’t rush! Traffic was minimal as we left Valencia behind.
The weather was sunny, not a cloud in the sky, and although we maintained our speed, we were on a time constraint to stop at 4.30pm to watch England – Scotland match.
A quick stop for coffee and lunch, we found a very cheap hotel close to Pepignon France to stay the night, oh dear our standards have dropped!
In fairness we slept very well, and they produced a good breakfast, so no real complaints.
We set of, after filling up with fuel, it is 99.4cents, more expensive than Spain, we were only paying 88 cents there. We travelled through diabolical weather, rain rain and more rain, it was horrendous, making driving difficult, and once we had cleared France and into Italy, the motorways were only two lanes, with lots of bends, at least it made driving interesting. We finally stopped at La Spieza where we found a nice hotel, and stopped for the night, and it’s still raining!
We had a lovely dinner, I think they were struggling to cope with so many in restaurant, but we were one of the first, so had no problems, food was excellent.
After a lovely breakfast, we filled the car up with fuel €1.15, so more expensive here, then headed for our destination Castellammare di Stabia, another six hours of driving, as we got further south, the weather picked up, we even saw some sunshine!
We decided to drive hard to get here quick, and after exploring this region, we will take a slower drive home. 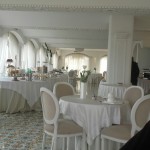 The hotel we are staying at is lovely, as old Manor House I would imagine, and Very comfortable, but because out of season quite quiet. 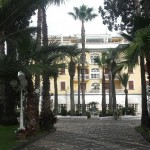 We had a snack and a bottle of wine, and then retir d to bed, to contemplate what we are doing tomorrow. 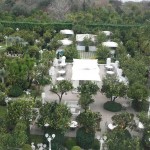 This entry was posted in Castellammare di Stabia, Italy. Bookmark the permalink.