After the decision to cancel our flights to the USA, cancel our 16-day cruise back to Spain, and bring forward our departure from Antigua we departed.????

Our Virgin flight was fantastic, the service was exceptional and the cabin crew were friendly, a far cry from from our BA experience.  On both flights we paid to go Premium Economy but they were poles apart, eat your heart out BA and sort yourself out.

Arriving at some ghastly hour to a rainy Gatwick, we were totally 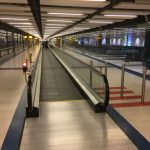 surprised how quiet it was.  We went straight through border control and didn’t have to wait too long for our cases to appear on the belt.  Through the green channel and onto the car hire people where our car was waiting.

Our drive to Jane’s was hopeless as the M23 was closed due to road works and what should have been a 45-minute journey took a couple of hours, still we arrived to a warm welcome.

We had flights booked out on Monday evening, but with the Coronavirus virus accelerating we took the management decision to try and bring our return flight forward to Saturday.  Fortunately Christine managed to do this but it meant we got back to Spain in the early hours of the morning.  At this point we have to say a very big thank you to Jim Merrydew for agreeing to collect us from the airport.

Though our weekend was shortened, it was great to meet-up with 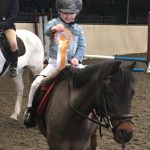 Mia coming third in the competition

Jane, Dave and little Mia including a quick trip to a show where Mia rode in a cross-poles competition for hand-led ponies.  She did very well and got a rosette for third place!

Arriving back at an even emptier Gatwick after returning the car, we joined the queue for Vueling flights which was a little manic with numerous Spaniards trying to get back.  Apparently they had cancelled several flights but fortunately ours was OK, so after checking in headed straight to the lounge for our “dinner”!

We boarded on time but when they closed the doors, we were surprised how empty the ‘plane was so we managed to move forward into 3 seats in the more expensive selection with extra leg room; very good.   Obviously none of the Spaniards at the Vueling desk wanted to travel to Alicanté.

Touching down at 10-minutes early, we walked into a ghostly Alicanté airport, straight through passport control and watched as our cases were amongst the first few through.  Walking out we saw the friendly face of Jim waiting.   We eventually arrived back home at 0230hrs and joined the rest of the Spanish population in Lockdown.  Thank you again Jim for meeting us at Alicanté airport in these very difficult times.

Whilst updating our site, just a little reminder for us about this small 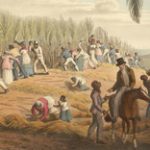 lovely, Caribbean island of 281sq Meters and 365 beaches in paradise, where the sun shines between 8 to 9.5 hours a day on average.  Here they have two seasons, the dry season mid January to June and the wet season, though there is also hurricane season from June to November but the dangerous months are mid August to mid October.

The first thing that hits you when you arrive is the very modern, large, empty airport, financed by the Chinese at a cost of $98-million and it’s a far cry from the one we arrived at all those years ago.     This 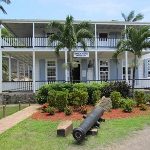 modernity disappears as you drive out of the airport complex.  One is straight onto original roads littered with potholes and ruts, passing many assorted wooden homes reminiscent of a modernist shanty town.  The island has a population a little over 80k, mostly in the St Johns area (capital) and counting the number of vehicles including the abandoned ones, probably the same number!!!!!!

Antigua was a very important “cog” in the British Empire, and by the 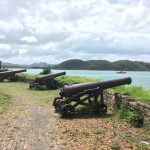 end of the 18th century it was known as the “gateway to the Caribbean” and English Harbour, and the well guarded Nelsons Dockyard, started in 1725 in particular, as this was the headquarters of the Caribbean fleet looking after all the British interests in the Caribbean.  There are numerous forts, or remains of forts around the Island, guarding it as at that time the French were “the” enemy and “they” wanted it!

During 17th century and the early part of the 18th century, tobacco was the main crop grown but when they realised more money was to be 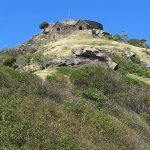 made growing sugarcane, well, there was an eruption in production and by the middle of the 18th century, when in full production, there were around 150 or so sugarcane processing windmills, which in turn saw the population of slaves from Africa increase fulfilling the needs of production.

In 1834 Slavery was abolished by Britain and all the slaves were emancipated and though this improved things, by then the sugar 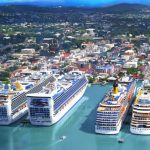 industry had already began to fizzle out.    The economy never picked up until tourism started to flourish and today they encourage visitors with their numerous beautiful beaches, many holiday resorts and of course cruise liners, up to four a day, and we mustn’t forget the abundance of fresh fish available from its waters around the Island.  Antigua is also a magnet for 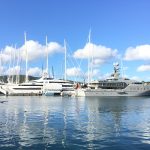 sailors and in Falmouth Harbour one can see many of the worlds grandest super yachts moored up alongside “normal” yachts.

In 1968 Antigua became an associated state of the Commonwealth and on the 1st November 1981 Antigua and Barbuda gained full independence and became a constitutional monarchy within the Commonwealth.

We’ve visited this Island on many previous occasions, mainly when we had our boat, (Anam Cara) out here, but never hired a car and spent long enough to really get to know the Island, find those isolated areas away from the tourists, and meet so many of the very friendly local people, who on the face of it look intimidating, but aren’t.

As I said we thoroughly enjoyed our time in Antigua, will we return; who knows as there are many other places in the world we can go and 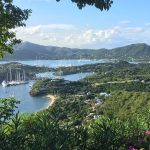 One of my favourite views

hibernate in.  Just keep an eye out on www.oldiesontour.com