We were woken up to Dotty’s dulcet voice over the PA this morning advising us of todays schedule; we would shortly be starting the tender service across to Alter do Chao and that the last tender would be leaving at 1330hrs.

There is not a lot to say about this place, it seemed to be a religious centre in the 17th and 18th century led by Jesuits of the Franciscan order.   Early in the 20th century it was one of several transportation routes for latex extracted from rubber trees, but by the 50’s the town was in decay. 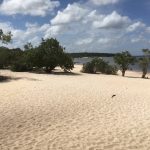 Nowadays this place is best known for its Ilha do Amor (Island of love), a picturesque island ringed by a white sandy beach directly in front of the “town”.   “The Caribbean of the Amazon’ it is called because of its crystalline waters, white-sand beaches, and laid back vibe; it is one of the places to spend a few laid back days, we are told!!!

Todays tender ride was un-eventful, we arrived quickly with no 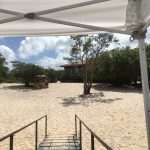 hic-ups or delays, disembarked, walked over the sandy beach, across a wooden walkway, with some gaping gaps between the planks in 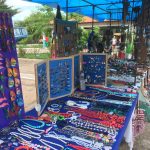 places, and into a small square with a number of 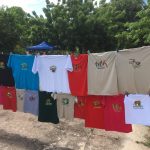 Lots and lots of t/shirts for sell, all shapes and sizes

touristy type stalls selling the usual c…p; nothing apart for a fridge magnet for us: so back to the beach for a paddle. 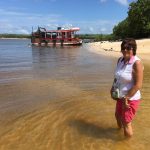 Crystal clear waters, makes a change from the murky waters of the Amazon

We boarded the next tender and arrived back with our Canadian 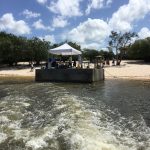 The jetty we left from, so small but functionable

friends and arranged to play crib before lunch.

After lunch I had a lecture to go to and then we had a lay in the sun, had a swim and prepped for dinner. Tonight we had dinner with a charming Australian Widow; her husband she mentioned on several occasions was a Spitfire pilot in WW2. This was followed by the evening show: a Welshman, Mark Newsome, who was a comic; a singer, and a very accomplished piano player; he was extremely entertaining.

We are at sea for the next couple of days so our readers can have a rest!!!!!