The Historic playground of the rich and famous, although these days they are venturing to pastures new; Acapulco is getting a reputation for drugs and violence and we were strongly recommended not to take any jewelry or valuables ashore as pick pockets and other disreputable characters are hovering around tourists: nothing different from other destinations though!!! 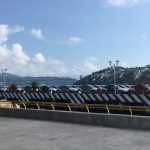 After our normal excellent weight watching breakfast we went on deck to watch the ship dock alongside a quay full of new Volkswagen cars, no doubt awaiting delivery.

We were off around 10.30 am and walked straight into the usual 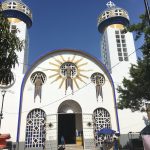 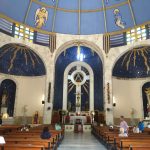 Inside the cathedral with unusual dome

operators, all offering the cheapest deal for what ever we wanted to do. We on the other hand had our own ideas; we were going to mooch around the old town amongst the locals taking in their ambience, after which we were heading off to see the cliff divers.   We had found out their show started at 1300 hrs.’ and organised our morning to suit. 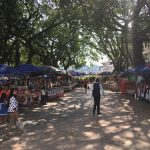 In the square with bustling market and beautiful colours

We wandered around this very busy and bustling square full of “arts and crafts” stalls and workmen laying pattern concrete walkways, all at the same time; very interesting, especially as where there were manholes, the covers were 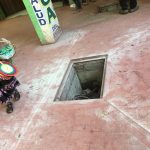 No covers on many of drains

missing; how nobody fell down these holes, I don’t know. 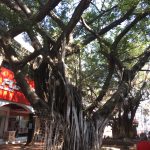 Mexicans going about their daily business before venturing out to the cliff divers who were over the hill and in the next bay, approximately 1 KM away. Most sensible folk took taxis or went on a tour, but not us, we walked. We struggled up this steep hill with a fully loaded rucksack (water), it was very hot and we stopped every 100 meters or so to get our breath; 1 KM in theses conditions was hard work, still we arrived at the top, overlooking the area where they performed however, we then had to walk down numerous steps to the viewing deck, just above sea level!!!!! To make matters even more uncomfortable we arrived 20 minutes early and with no shade we were roasted, but we had front line viewing so long as we stayed there, with the sun beating down on us.

The appointed hour arrived and went, Spanish style; still eventually the divers arrived in ones and twos. Firstly they dived into the sea from our side of the Channel, had a swim 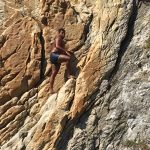 Climbing barefooted up the side of the cliff 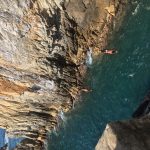 the cliff was high and very steep but more importantly, the area of water they dived into was pretty narrow, no wonder they said a little prayer to an effigy of the virgin Mary before they “went for it” 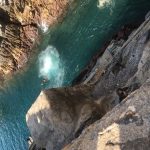 For folks who like a few facts, here we go:-

Naturally we had to pay an entrance fee to see them, a little different from when I was last here, 20 years ago when it was free, just a donation but still worth every penny.

OK, now we had to re-climb all those steps, it was still 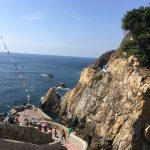 extremely hot; our cloths were soaking and we were knackered as well. Standing in the sun, no shade, waiting for the performance took its toll, still we made it. Once at the top of the steps we were in free fall, it was 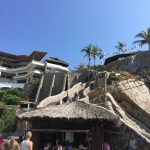 downhill all the way back into the town. We recognized a number of our fellow cruisers who had taken the tour getting back onto their buses but strangely we arrived back In town the same time as their coaches: too much traffic!!!

By now we had had enough and headed back to the ship, however we had one more task to perform; we had to buy a fridge magnet. Now you would think this was a simple task but no, we looked at numerous stalls, looked into a number of stores and regretted we didn’t get one at the cliff diving area. After much looking we called it a day and headed back into the port and guess what, here we bought a fridge magnet. 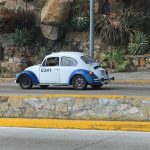 Whilst walking around we noticed all taxis were white and blue and the majority of them were beaten up Volkswagens; maybe this is why the dock is full of new ones, to replace the current fleet!!!!

One thing I did note was the total lack of pickpockets, muggers and drug dealers, again it was the cruise line being over cautious and American, though I did note a lot of Army and Police armed to the hilt which probably acted as a deterrent

Back on board we changed, had a cupper and then up to the pool for a dip, afternoon cocktails in the sun, as if we hadn’t had enough!!!

Such a lovely restaurant

Tonight we had booked to go into Red Ginger, one of the specialist restaurants on board and we weren’t disappointed, we had an excellent meal with all the necessary “trimmings” This was followed by tonight’s show, Christine’s magician, and what another spectacular performance it was, even though he chose a different person to help!!!! He did some amazing and un-believable tricks that defy any logic: it’s a shame he is leaving the ship; he is probably the best entertainment we have had on this trip so far.

Tomorrow we’re at sea, relaxing is the order of the day so there will probably be no post until we have been to our next port of call, Guatemala.