We were up and away by 8am, I wanted to get through the lock and use the facilities and as we have a massive water tank, it takes forever to fill up. The lock was on Self service so I pressed the buttons and we went through, found the water pipe, and quickly attached it, we then had a leisurely breakfast whilst filling the tank, Geoff did all the other jobs, then we were ready to go. Abingdon to Oxford is not far about eight miles, so a lazy day.

Our first lock was Sandford Lock, which was on self service, so I went and did the business, pressed a few buttons and we were away again, we are amazed with all the volunteers around, who are trained by 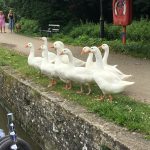 DEFRA to do the locks, but are only allowed to help when there is a qualified Lock-keeper on duty, yet we are able to use the machines, without any training, there is a shortage of lock keepers, so a lot of them are unmanned, I guess if there was a problem they could be faced with a big insurance claim.

We were making very slow progress, as after the storm last night 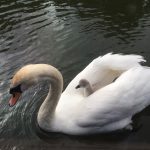 apparently they had over 33mm of rain, the river is flooded, so are parts of Oxford itself. At times it felt as if we were standing still, as we have a very small engine 43hp! But the scenery is very pretty, and it is a pleasure to meander, and watch all the wild life, I caught a glimpse of a kingfisher which pleased me, Geoff managed to photo a swan carrying her baby on her back, so lovely. 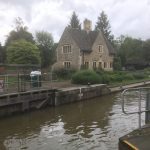 Eventually we arrived at Iffley, where we were told the River was on red alert, and we would not get pass Osney, and probably find difficulties in mooring so we decided to stay here, we found a nice mooring, with the added bonus of not having to pay because of the red alert.

After lunch we wondered into the local village, and collected some odds and ends from the little community shop, and then we walked to the local 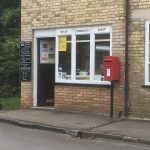 church of St.Mary’s Virgin, this church was built in 1160, and extended in the 1200, it is the oldest preserved Norman church in 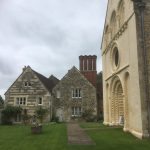 We went to see the lock-keeper to be told we could go no further, as Osney is still on red alert, and they were 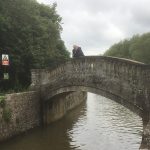 Bridge leading to the lock

crowded with boats up there, so we decided to do some jobs. When we bought the boat, there was a bicycle on the back which we have never even looked at, so we decided to strip it down, well it was a foldaway with very tiny wheels, and we both decided that we would never use it, so Geoff pushed it towards the rubbish bin, it was not long before a young girl came along and took it, 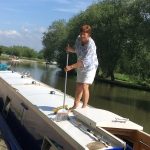 Geoff called out to her, and she stopped and chatted, but her face was a picture, she was so chuffed with her new possession, and she quickly cycled off with two flat tyres.
Next we decided to clean the boat, I climbed on the roof, whilst Geoff was able to reach from the towpath, between us we scrubbed and 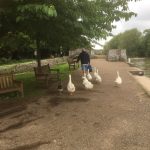 polished, and Megan is looking very good again. In the afternoon we walked to the nearest TESCO Express where we stocked up with some booze and bacon, ready for Andrew tomorrow.

A lovely day, sun is shinning, and Andrew and Fiona arrived, it was great seeing Andrew again, we have not seen each other since before Xmas. As we couldn’t go forward, we decided to go back to Sandford Lock, where there was a Chef and Brewer pub, we meandered down the river again, the weather couldn’t have been better, we went beyond the 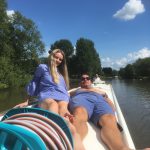 Sunbathing on the roof

Lock, then turned and made our way back, it is still very slow as the water is still running very fast. We moored outside the pub, and went in, Fiona had her two little dogs with her, so we sat in the garden, which was lovely, and although the service was really bad, the food was good, lots of catch up on news etc., before returning to boat, and another slow meander up the river, we watched people swimming, and messing around in their dinghy’s. We had a great day, and it was lovely to meet Fiona, let’s hope it lasts. Back at the lock, we went our separate ways, let’s hope we see them soon.

Still stuck here, it is lovely, but we want to get on our way now, we 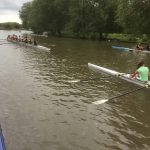 enjoy watching the canoeists in training, you have the lot here, from the eights down to the single rowers, they are all shouted at from the trainers on the towpath, there is a rowing club very near us.