A trip into the Andes

We were waiting in the hotel lobby as instructed at 0815hrs for our pick-up driver to arrive, we got ourselves a cuppa as we presumed we would have time to drink it, assuming we would have to wait. No, we were wrong, the pick-up driver arrived within a couple of minutes of the specified time. We then visited a number of other hotels before arriving at the “sorting” stop. Here there were a number of feeder buses bringing tourists for the various coach trips.

Our coach was much smaller than the rest but as we were only 12 in our group, this was the reason.   Well that’s what we thought, once we had left the city and started heading into the mountains, the roads were narrow and full of hairpin bends, in fact over 60 our guide told us, hence this small size coach. 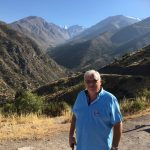 Half way up, stunning views

Including a shortstop en-route, the trip took about 1½hrs and we travelled through some stunning mountain scenery. When we arrived at the ski resort, “Valle Nevada”, being high summer here there was no snow!!! This resort, which is a little over 3,000 meters, was started 1987, but it wasn’t until 2008/2010 that 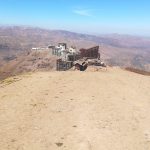 important building projects were undertaken to offer more beds for tourists. Today it looked deserted, but one 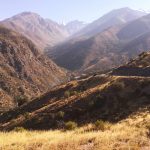 could see what it must be like in their high season, June/July. We were also told to look out for Condors; though en route we were disappointed we didn’t spot any. 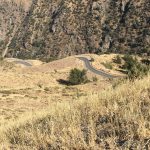 Some of the twisty roads

When we booked, it was suggested we could take an additional 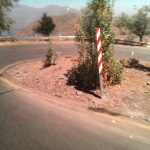 trip in a cable car, travelling higher towards the glaciers but unfortunately none were running due to annual maintenance. Though 3,000-meters isn’t particularly high, I found the thin air affected me today and I wasn’t up to walking higher. We therefore made do with coffee, 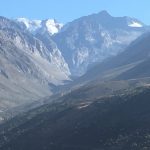 Views from the top with glacier

tea and some very enjoyable Prawn and cheese Empanados whilst sitting in the sun and admiring the views.

Travelling up into these mountains, the coach passed numerous 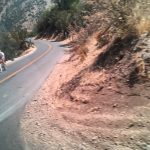 Cyclist heading up, must be fit

cyclists peddling their way up; I suspect we all had the same thoughts, “why put yourself through all this pain”, still, soon after we had arrived the first few cyclists also got there and we asked them how long it took to get up the mountain, 3-hours they replied; no doubt they will get down much quicker. 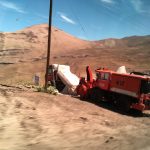 Some of the snow machines, they were huge

The younger members of our tour went walking further up, but we suspect they didn’t see much more than we did.

As we headed back to the coach we spotted them, a pair of 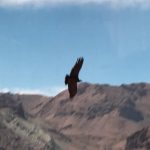 Condor in flight, they are massive

Condors circulating above which was exciting. It would have been a 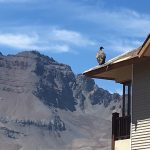 bitter pill to swallow, going into the Andes and not seeing a Condor. What we didn’t realise was just how big they are, they have a wingspan of around 3-metres and can weigh in the region of 12Kg and they live for up to 60 years. Anyway, everyone piled out of the coach to watch and photograph them, 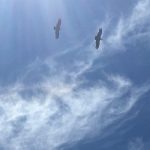 Quite graceful considering their size

and as we were watching the first pair, a third Condor joined them, quite a sight as they all circled above us.

Eventually Dieter, our tour guide, called everyone back and we started the twisty downhill descent and we passed a number of 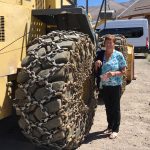 giant snow clearing machines. Going down was naturally quicker than going up and in no time we were back in the city, dropping people off as required, and we were soon back at our hotel as well.

We thoroughly enjoyed the trip, glad we went and it was nice to have some clean, fresh air to breath. Before we went we debated what to wear, should we don warm clothes or not; what will the weather be like, hot or cold; anyway we compromised and went mid way but we needn’t have bothered, the sun shone and it was lovely and warm.

Later we trundled over to the Costanera building and enjoyed a 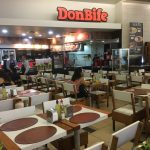 It was packed when we were eating there

Parrilla in the food hall; it was a fast food “steak chain” called DonBife, and not only excellent value, the various meats were tasty and tender. We then went silly; walking back we spotted a “crêpes” outlet so before returning to the hotel for the evening, we indulged, 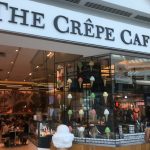 lovely!!!!
This entry was posted in Chile. Bookmark the permalink.