A trek in the Jungle

Yet again we were waiting for the alarm to go off at 6 am this morning, although rather than an alarm, it was a music across the tannoy system followed by a reminder breakfast would be served at 6.30 am.  Being awake before the alarm we had time to enjoy a cup of tea on the sundeck and watch the sun come up, very good.

Following breakfast we all mustered below on A Deck when we embarked into our canoe, this manoeuvre was done as the ship was travelling along the river, with the canoe tied up alongside. 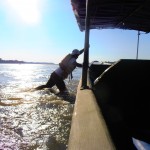 Pushing us of the sandbanks again!

We had a pleasant ride in the motorised canoe, getting stuck on the sand bar only once when the guide and the attendant had to get into the water to push us off.

After landing we started our jungle trek, to the Panayacu (Piranha River) , stopping to photo this bug or that leaf, and on one occasion a foot print in the mud! after about half an hour we 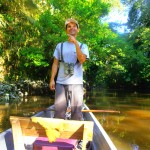 Our guide had just spotted some monkeys

got into another but smaller canoe which had to be paddled, thankfully not by us.

After about an hour and a half at looking at numerous species of birds, distant monkeys high in the trees, butterflies etc., etc., we got out of the canoe and started another trek. Again after photographing everything that moved or didn’t, we arrived at a 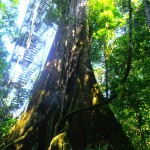 The tower we climbed

30 metre tower.  Now we did know about this tower but when we got to the bottom, it looked very high and steep and as one of us had to look after the bags I volunteered of course!!  I wasn’t too bothered as I had been up to the rainforest canopy in Australia and that was via a cable 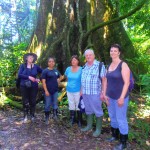 The group before we climbed to the top of tower

car, anyway they all started the climb. Sometime later Christine was the first to come down then the rest followed at short intervals, and we all went back to our paddle canoe for more wandering through the swamps, photographing, 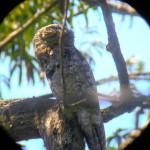 birds, trees, plants etc., and then the highlight we came across a Black Cayman, it looks like a small Alligator.  He or she lay very still but kept his/her beady eye on us, waiting to see if we made a false move.  Our canoe drifted slowly towards his/her, and we 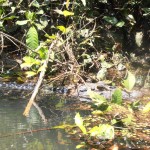 came within touching distance, needless to say no hands went outside the boat.

We were hoping to see the unusual pink river dolphins but alas none were home. oh dear what a disappointment!

Next stop a bar-b-q lunch in a clearing, very nice though poor Christine had been suffering with tummy pains so was happy to find a suitable place to carry out her business. 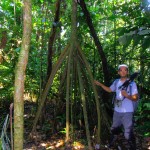 One of the many strange tree roots in the jungle

After lunch the party went off for another trek in the jungle, and no doubt would be photographing anything and everything, Christine and I had a lay down instead.

The trekking party duly returned after  a little more than an hour, and judging by the comments we did not miss much.  So back to our canoe for the return journey seeing much of what we had seen before. Ninety minutes later we left our canoe to trek overland back to our motorized canoe waiting on the Napo River to take us back to the boat the Manatee, moored up stream on another bank.

Back on board for showers etc, although Christine’s tummy is still poorly.  As things are at present we will stay aboard tomorrow. I actually think this will be nice as we were looking forward to cruising the Amazon and going ashore for different interesting visits, but today lasted from 07.15 – 16.45 , nine and half hours in the hot sun, maybe this has also contributed to Christine feeling bad. Anyway, after much deliberation  Christine went to bed, and I went to dinner, I also arranged to change the early morning call from the ‘Heidi Hi’ over the tannoy system to a tap on the door for those who wanted it.

Today was the perfect day for Botanists, Lepidopterologist, Ornithologists, and Entomologists, but us mere mortals who like watching action activities we were quite bored. Like our friends says unlike ABC (Another bloody church) we had MBJ (more bloody jungle).