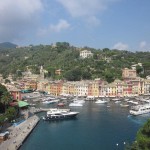 Portofino from the top of the hill

The last time I visited Portofino was around 1955 when I was 11 and it has always stuck in my memory as it was so pretty and quaint, built at the end of a small peninsular and with an interesting and significant History.  As we were in this part of Italy I suggested we spent a day there as I was sure Christine would enjoy it, albeit not the historical side of things!! 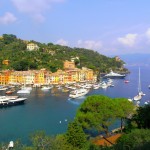 coast road winds its way through several towns and villages hugging the mountain sides it will take over an hour on our bikes to get there so the first issue is what we can do with Sooty & Bella. Obviously if we wanted to go they would be on their own for far too long in Rosie, so again Christine with tongue in cheek, asked the camp site Manager/owner if he knew anyone who dog sat; well blow me down, he did!!!

Arrangements were made for the “dog sitter” to collect them Monday early evening and return them Wednesday afternoon.  He is a local Policeman and the times fit in with his travel arrangements to and from work and the shifts he does.  During his absence they are cared for by his wife, who it turns out competes in obedience competitions with their collies and has in fact just returned from competing in Scotland.  Anyway I digress: firstly with no dogs pattering about Rosie and waking us up anytime from first light, we didn’t wake ‘till 0830, on Tuesday morning, a real treat.

We had a leisurely breakfast, did a few housekeeping chores, showered and after coffee left on Pinky & Perky.  We had a coffee before we left as we had been warned that a coffee in Portofino could cost up to €20!!!!!!!!!!  I think at this point I would just quote from the Italian “Lonely Planet guide”     Portofino is described as follows:-

A byword for refined luxury, stately Portofino is beyond the wallet-stretching capabilities of most budget-minded travellers 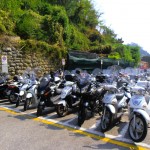 We finally arrived, parked in the wrong place at first and were moved on by a very friendly female “copper” speaking excellent English.  When we parked in the right place, we were amazed as to how many motor bikes and scooters were parked together in one place, there seemed to be hundreds of them.

We walked down the pedestrianised cobbled street to the 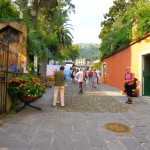 harbour. Apart from there being more people milling about, Portofino is very much as I remember but when we got down to the harbour it is not quite the quaint fishing village I remembered; it is now a marina, but worse than that there was a cruise ship moored in the bay and the place was full of Americans.  We now understand why we were warned about the prices of everything, not to mention the cruise ships calling, most of the locals are celebrities, millionaires with some royalty attracting shops that sell very expensive diamonds, jewellery, designer clothes, shoes and fancy handbags. 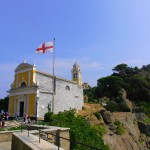 We wandered up the hill to one of the many churches; this hill also had a castle built on top and as it overlooked the bay and harbour was an excellent look-out used in by-gone days, but today 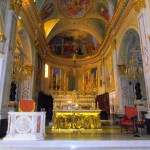 highlights the very pretty views and well worth the struggle up the hill.  We then headed back down some very narrow and steep steps back to the harbour area and started looking at the restaurant menus as we were both getting hungry.  Yes there were very expensive eating houses but we did manage to find something reasonable, well reasonable for somewhere like Portofino, and though we had only 1 course and wine, and very acceptable it was too; it only hurts when you think that back in Spain we could have had 4 x 3 course Menu Del Dias with ½ a bottle of wine each for the same money!!!!! 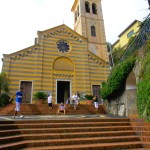 After further exploring round quaint streets, up and down the hill and seeing inside numerous splendidly and richly appointed churches, we indulged in another wonderful Italian Ice Cream. Now it was time to start the return journey but 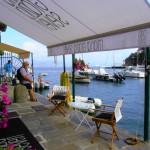 we would stop and take a swim in the Mediterranean en route. Walking back to our bikes, Christine agreed this was a place well worth visiting and thoroughly enjoyed herself. 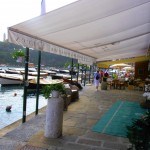 The traffic on our return was horrendous, people returning home from work together with the tourists doing their thing made our bike rides interesting to say the least.  I have decided the reason there are so many motor bikes and scooters is very simple, cost of petrol, it is around €2 litre.

We stopped in Santa Margherita for our swim;  just parked Pinky & Perky, walked 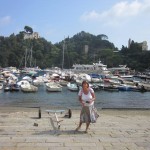 onto the beach and into a warn, clear, empty sea, great. This was followed by a walk around town then back to fighting the traffic round the sharp bends and ups and downs of this coast road on this beautiful part of the Italian Riviera.

We made a detour around Sestri Levante (the town below our camp site) Marina and the sea front before setting back up the mountain to our camp site.

We both missed the dogs but would not have been able to have such a great day out if we were worrying about their welfare, thank you Mr Italian Policeman, €30 well spent.

We will now hang around tomorrow waiting for the dogs return, pack up and off on Thursday morning for another adventure

2 Responses to A Nostalgic Visit