A Magical Day out in Venice 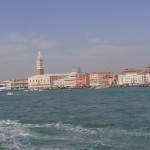 View from the Ferry

Saturday 25th August, a day I shall always remember! We had arranged for the dogs to go into kennels overnight, so the lady picked them up from the campsite at 10.00am, off they trotted with not a glance backwards; they obviously enjoyed their stay on Thursday

We did our 25km bike ride to the ferry again, parked, and just 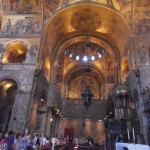 made the next boat, so we were in Venice by 11.00am, it was still very crowded, but we decided to do the Basillica di San Marco first. I queued whilst Geoff went and left his bag at left luggage.  I was still queuing when he returned, but apparently he had a ticket which allows us to enter without waiting, so we went to the front, straight in, and 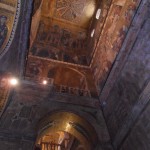 well the WOW Factor! Was just amazing, gold domes everywhere, the ceilings were covered with paintings, and surrounded with gold, you have to see it, to believe it.  We took photos (No photos allowed) but they do not really do the place justice.  We slowly walked around, but no amount of words could really describe the place, it was just sheer decadents.

Coffee time, and decide what was next, so we sat down in the square (St.Mark’s) we had been told that coffee was expensive here, but Geoff said it had to be done! One Tea, one coffee, and two pastries 26 Euros, the waiters had white jackets, black waistcoats, black trousers; they must have been sweltering in this heat. We watched the hordes of tourists, taking photos, and just milling around, another first. 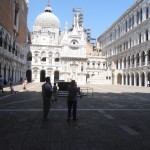 Next stop was the Palazzo Ducale, I don’t do history, so needed to get this one out of the way, we queued but not for long, then paid, we asked for concession tickets, she looked at me and said two, which made my day!

Entering through the colonnaded court-yard you will see 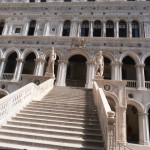 statues of Mars and Neptune, flanking the giant staircase, built for the dignitaries, climb the golden staircase, where gold leaf is everywhere, the ceilings are decorated with carved picture frames painted with gold, 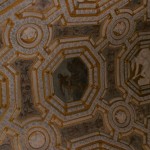 with so many different pictures, depicting different eras of history. They had a room with two huge globes, and maps on the walls showing what the empire used to look like, the accuracy of the maps and charts dated back to the 15th century, was quite remarkable. We went down into 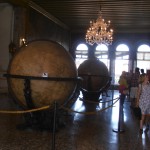 the prison, where the condemned prisoners walked over the covered Ponte dei Sospiri (Bridge of Sighs).  Neither of us is into art, but we were both taken back by the place, difficult to describe, but it is a definite must if you go to Venice.

We were both starving by this point 3pm, so we found a place on one of the little back streets, and had a pleasant glass of wine, and shared one of the best pizzas we have ever had.  We sat next to another couple, (who came from Scotland) who had just done the gondola run, and they had been advised to go to Rialta to get one, so after lunch and an interesting discussion on whether Scotland should leave UK or not, we caught the water bus. 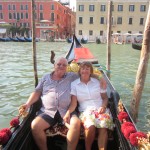 Geoff negotiated with the gondolier, and we stepped aboard, I was sitting in the wrong place, for the balance, so had to change, and once we got comfortable we were off, well it was amazing. We went under Rialta famous bridge, where we 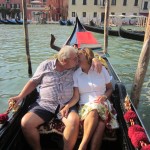 were told you kiss, and everything you wish for comes true, at this point Geoff proposed to me, I was just so surprised, he even had a ring, now how romantic is that, he said he would have gone onto his knees, but he had already been told to keep still, so will forgive him for that.  I was speechless, but I did manage to say YES, so party time soon. 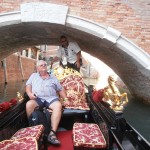 We meandered through the waterways, going under tiny bridges, and having to stop when someone wanted to go by, a truly magical experience. 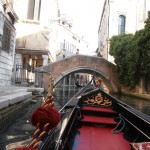 We made several calls to the family, only to find that Andrew already knew, as Geoff had asked him for his approval, (as my Dad was no longer with us). (Old fashioned bugger) whilst having a drink to toast the occasion, when ever that might be, not sure how we are going to fit everything into our busy schedule, but sure we will manage somehow.

We bought two pictures one of the bridges, and one of the routes, just as a reminder of our special day.

Back to Piazza San Marco, where we found a lovely restaurant to finish of the day, we both had fish, and to watch the waiter fillet them was skilful. 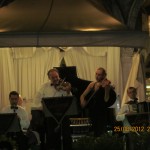 We then wondered around the square, by which time it was dark, and it was such a magical place to be, there were three different orchestra’s playing, one would stop another would start, street sellers, and hundreds of people just 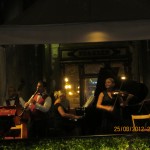 looking around.  I cannot really describe the day, but take it from me; it was one of the best days of my life. We meandered through the streets, found the ferry, and back on the bikes and home, it is funny not having the dogs with us.

8 Responses to A Magical Day out in Venice