Good morning, Valantines day and our anniversary, 11 years, who would have believed that after our track records!!!!!  Anyway leisurely breakfast, though Christine did give me a card but unfortunately I didn’t respond, however, I did mention this fact yesterday, explaining I had decided to buy here in Italy though I didn’t find an outlet that sold cards, oops!!!!! 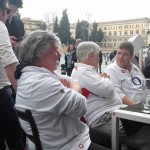 to catch up on a few things, including our log. where many Rugby fans stop for drinks, so did we.  After a while and a few beers we started the walk to the Olympic Stadium, built for the Olympic Games in 1960.  Tom Tom suggested this would take around 20 minutes, he/she was wrong, the walk went on for ever but arrived outside a nice looking restaurant in front of the stadium complex around 1 1/2 hrs before kick off so went in for drink and some assorted Bruschetta, very nice but had to get on so having eaten and drunk, paid the bill and we left.  At this point we had about 40 minutes to kick off, sufficient time to get to our seats collecting a beer on the way.

The logistics, common sense and organisation doesn’t fit comfortably here in Italy; we arrived at our seats just as George Ford kicked off, and 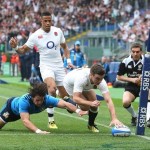 this was without any beers.

The game was a game of two halves as they say; the first half England did not play well but the Italians did and at half time the scores were: Italy 9 England 11 but, had Italy not missed two penalties, they would have been in the lead; at this point England was living on borrowed time. 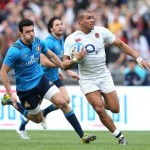 The second half was different, Eddie Jones must have put a rocket up the team during the interval as they came out fighting and went on to score tries and dominate the game.  The final score Italy 9 England 40 but I must say that had we been playing a good team such as France, Wales or Ireland, things may gave been different.  Still with a break next weekend, perhaps, just perhaps, Eddie Jones 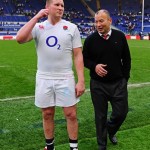 Head Coach Eddie Jones talks with Dylan Hartley Captain after the win against Italy. 9 – 40 to England

will work his magic. 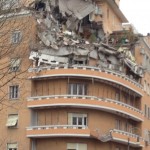 We walked back from the ground to Piazza del  Popolo  a different way, shorter we think, and passing a block of flats that had one corner blown out, how was that??  We  jumped into a taxi and back to the hotel where we showered 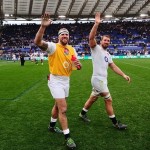 James Haskell and Chris Robshaw applaud the crowed after the match

and changed before setting out for our anniversary dinner.

Just down the road from our hotel was a restaurant specialising in fish, so naturally that’s where we had to go.  We had a 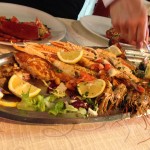 magnificent mixed fish grill, Lobster, Salmon,  Sea Bass, Prawns, Langustines and others washed down with a couple of bottles of Frascati, wonderful, though it would probably been cheaper to fly 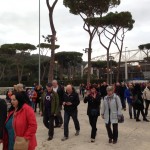 Leaving the Olympic Park after a resounding win

to Thailand!!!!! Oh well I made amends for forgetting to buy Christine a card!!!!

Back to the hotel for another good nights sleep before we hit the Vatican tomorrow with Trevor and his new family.