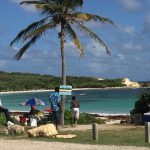 Continuing our theme to get to as many beaches as we can, today is the turn of “Half Moon Bay Beach”, which is situated on the South East of the Antigua.   However before we go, we had to do our usual supermarket run.

Our drive to Half Moon was over roads we hadn’t been on before, driving right past

the Sir Vivian Richards cricket stadium, the new stadium built in 2007 for the cricket World Cup, held in the West Indies.  This 10,000 seater stadium sits majestically a few miles out of St Johns but is hardly ever used.  The roads are in desperate need of repair yet there is no money, crazy or what; still it’s all for the love of their main sport,

cricket.  A few years ago we visited their old 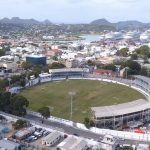 cricket stadium, it was adequate, so why not throw about 20% of the cost of the new stadium, and then they could have used the rest to sort the roads!!!!   I suppose, having been on nearly all the roads in Antigua, the only decent bit of road is the bit outside the new stadium.  Moaning over, I  suppose the hot, sunny weather more than compensates for this inconvenience of bad roads!!! 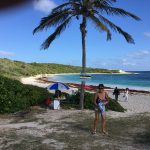 Off to the bar

shoreline, I suspect there had been some bad weather in the Atlantic that caused this.

We enjoyed our lunch on some tables provided by the beach bar, probably shouldn’t have used them as they sell food, still we bought a couple of beers!!! 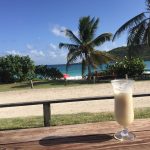 Idyllic settings for a drink

Being on the Atlantic coast we had some rollers which made the dip in the sea more enjoyable, and the beach also had sun beds with sunbrellars, so Jeff and Hillary were content.   Following our swim we went to the bar and I enjoyed the first, hopefully of many, “Pina coladas” whilst watching the world go by.

After an exhausting day, well for Christine and I, we headed back to base.

Sunday, and the four of us had an early start as we headed over to 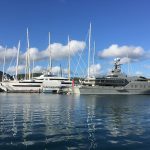 Falmouth Harbour to watch the France V England game being televised from Paris.  We watched it in Cloggy’s bar here in the Caribbean, what could be better; we’ll being there I suppose or better still, an England win.  Never mind, we were amongst like-minded people all enjoying 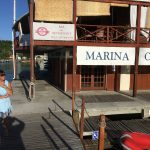 No boats for sale here

the atmosphere.   Following the game we had a wander about the harbour drooling over some of the multi-million pound super yachts moored up before we had a snack lunch, after which we headed to Carlisle beach, number 11 of 365.  Years ago we dropped anchor in this bay and had enjoyed, though a wet day, at the “posh” 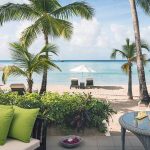 resort on Carlisle beach, it was good to get back again.  The beach is in this  sheltered bay and swimming was a pleasure.

Tonight we were treated to a meal at the Italian restaurant in Jolly Harbour, excellent food though I question the “Italian” pedigree!!!!

An action packed Sunday ended with the 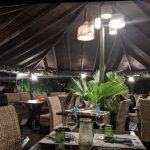 drive back to base camp.  Driving here at night brings a totally new meaning to “driving skills”; not only is one dodging the pot holes that can’t be seen ‘till the last minute, oncoming traffic have no idea about dipping headlights, they’re on full beam continuously.  No doubt the locals know each pothole individually, but as we are mere visitors we have to search them out, causing us to stop at times due to 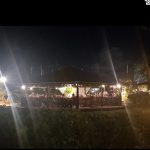 being blinded, still we got back safely.  In future going out after dark calls for a taxi.

Monday and it’s Jeff and Hilary’s last day and they elected to visit Fort James Beach, not too far from our cottage so after the usual morning chores we arrived at the beach, 12 of 365.   This beach being close to St Johns and the cruise ship terminal means it is more commercial and therefore busy, still as we were early and we would be 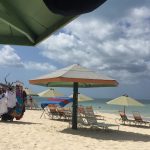 Always tell when the ships are in!

there for 4/5 hours, we also hired a couple of sun beds.

By early afternoon the beach was pretty busy as there were 3 cruise ships in, still the actual water was quiet enough so all was fine but around 1500hrs, there seemed to be mass migration, everybody went back to their ships and when we eventually left around 1700hrs, we were the last 4 people On this beach. 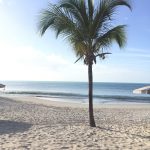 Beach to ourselves again

After our “last” supper 3 of us settled down to a game of Crib.   During the week we had re-aquatinted Jeff on how to play crib, something he used to play in his  youth.   His ambition tonight was to win one game, sadly, though he got very near he just couldn’t win.  During the evening as I was minding my own business concentrating on which card to play I felt something odd on my leg and as one does, I flicked it off.  Christine asked what’s the matter, and I told her, we then looked to see what it was.  Naturally I was accused of imaging it all but then to our surprise we saw a “toad/frog”, the thing on my leg.    It then jumped into the house and as we chased it, it had the good sense to jump into our cool box which had its top open to dry.   How fortunate for us and we dispatched it into the garden.  We didn’t fancy chasing it around the house trying to catch it!!!

This morning was about our guests packing etc., and for the first time this trip, Christine cooked us a full English late morning, and I must say it’s not too soon!!!!  To wile away some time, Jeff and I had a last game of crib and to his delight he won a game, he has now left with another happy memory. 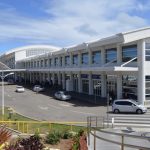 It was then time to head to the airport and send our guests off back  to the cold, damp, miserable UK weather whilst we returned to put our feet up ‘till Jane arrives at the end of the week.