Woke to full sunshine, what a lovely day, we have decided to stay an extra day, as it is easy to moor, plenty of space, and close to the centre of town.

We walked into Town about 11am, just in time to have the normal coffee, this time we tried Nero, Geoff actually had a mocca, which used all his allowances for the day in one cup of coffee! We then walked around looking for a fridge magnet, which we found in the Town Hall.

Geoff has for several weeks wanted a ploughman’s lunch, and yesterday we tracked one down, 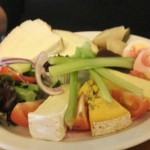 also today he is actually having one, which he enjoyed, although not much crusty bread, more salad, but it looked good. I had chicken pate, which was ok, but not up to the standard we had with Liz the other day.

After lunch we went shopping, Geoff has found a blower/Hoover for the garden which he is hoping is better than the one we have, I don’t mind if he uses it, another job saved!

Back to the boat for a game of crib, and an early night.

Woke up to the sound of the rain on the roof, what a terrible day, thick fog, generally Uck! The only problem is we have to move today as meeting Andrew on Sunday at Reading.

We waited for a bit, but decided that we had to go, we kitted ourselves out in wet gear, and travelled in the pouring rain, it did not let up,
we also had to stop for water, this time not bothering with the showers as we couldn’t be bothered to get undressed!

As we reached Sonning the weather improved, and we met up with Trevor, who hitched a ride to Reading with us, haven’t seen him in ages, so we caught up with all the gossip.

Once we arrived in Caversham and moored up we walked into Town where we had lunch in Weatherspoons, not bad actually, and reasonably priced. Trevor then left, we did some shopping and headed back to the boat, just in time for another downpour. Hope it clears up for tomorrow.

We watched television, and I had an early night.

This entry was posted in British Canals, Uncategorized. Bookmark the permalink.