Hooray, today we could have a lay-in, no rush, mainly due to the local agents making a slight change to our itinerary with an un-foreseen knock-on.  We were due to do the Machu Picchu Inca City  ruins today so that yesterday we had a nice day in and around the hotel enjoying the hot springs and 13 acres of tropical jungle 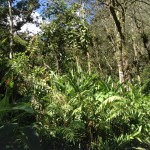 The “Jungle” garden at the Inkaterra

followed by a nice dinner and then today the visit, followed by lunch and the train back to Cusco.  So today we enjoyed the hot spring’s pool, re-negotiated last night’s missed dinner as lunch for today and sat in this beautiful garden surrounded by high mountains.  This beautiful hotel The Inkaterra, again with the Casitas (cabins) 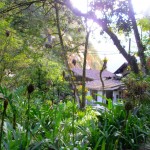 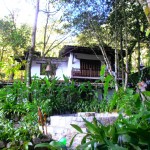 One of the Casitas set in this 13 acre jungle garden

there are many steps and of course, our cabin was at the top!!!! Still when we had climbed these steps and opened the door, the interior was superb.

So back to today; A leisurely breakfast was enjoyed whilst looking out onto mountains and  the very fast moving river 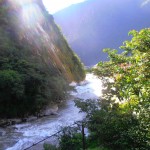 The fast flowing river below the Inkaterra Hotel

with the sun shining.  After a short time we donned our swimmers and went and enjoyed the hot spring pool, 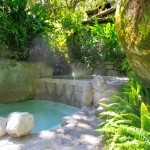 very hot so had to keep popping into the cooler one for rest bite!!  We didn’t venture into the third one in the series as 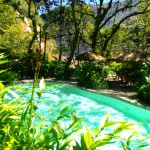 The pool below the hot springs at the Inkaterra Hotel

that would have been too cold!

After about an hour, it was back to the room for a shower and pack.  We had to be out by 1100 hrs but managed to persuade them to extend, which they did by half an hour, generous 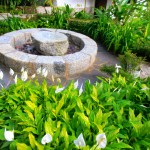 One of the many fountains in the Inkaterra Garden

Packed an out of our room by the appointed time we sat in this jungle garden playing crib until we went into launch around  1400 hrs, we enjoyed a three course lunch choosing local dishes, superb and 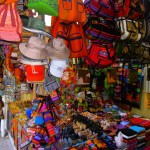 washed it down with some very nice Peruvian white wine which I have to say was excellent, I must look out for it in the supermarkets, if it gets to Europe.

We eventually left this first class hotel and apart from all the steps, would fully recommend it to anyone.  The hotel organised for our bags to be taken to the train station for us, 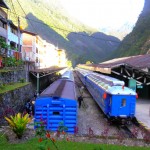 The Railway Station at Manchu Picchu

so we meandered down carefree, and boarded the train Carriage A, seats 15/16, everything was allocated.

This return journey was certainly different, apart from the “trolley dolly” handing out snacks and drinks, (included in the fare) we were then subjected to a court type jester (that obviously meant something) then a fashion show.  The 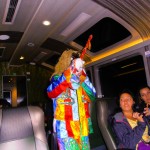 train attendants became models and displayed a number of local Peruvian outfits followed by the hard sell!  These clothes were very nice and probably all made from Alpaca wool, they were so soft. As we are struggling with case weight, we resisted temptation.

Now for the worst part of the journey; we had to leave the train and catch coaches for the last 1 1/2 hrs of the journey back to Cusco, we didn’t know why but had no choice.  Boy the driver must have thought he was in the Brazilian Grand Prix, how the coach stayed on all its wheels at times I don’t  know and overtaking was very reminiscent of Indian driving something coming, so what!  Still we arrived shaken but safely, to be met by our guide and  taken to this 5 star hotel; because we complained about our changes to the original program and then queried why they were changing our hotel, not only did they upgrade us they had also organised us a suite.  Is that good or what?

We arrived at our hotel and our mouthed dropped as you walk through the lobby that is reminiscent of an art gallery, paintings, yes paintings everywhere, I suspect there is a lot of history to this building, and we will have to find out more tomorrow.  We checked in and up to our suite where we were reunited with the cases we had to leave behind in the sacred valley. This suite has the biggest bed 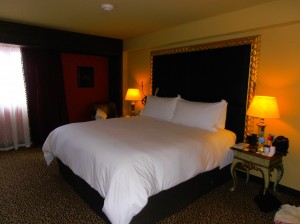 By this time we were exhausted so Christine did some “small’s” washing, we showered and went straight to bed, exhausted but very happy after a great time visiting Manchu Picchu and the surrounding area.