2 oceans and the Panama Canal

Boxing day, the first of the three sea days was quiet. We were getting over the excitement of seeing and meeting Santa yesterday, over indulging in the culinary delights and having the odd “drinky-poos” relaxing in the sun with the odd dip to cool off with. We also had a chance to get on with our reading.

On our second sea day, we entered the Panama canal from the pacific end passing Panama City then under the “Bridge of the Americas” a road bridge for the intercontinental highway which was built in 1962, however now they have added the additional large locks catering for the larger ships, this bridge is too low, they are going to have raise it!!   Talking about the larger locks, the original locks built for the opening in 1914, still operating today, can accommodate what is called “Panamax” size. To give you an idea, they can accommodate circa 5,000 container-size ships; the new locks can accommodate 10,000 container-size ships and to build these new locks, naturally they had to build new channels. The original canal itself has been widened during the years so this wasn’t a problem.

as Biomuseo: The area where the “Museo da la Boidiversidad en panamais”, (www.biomuseopanama.org) (Museum of Mexico) is sited. This building was designed by that “well-known” architect, Frank Gehry who, I don’t think anybody has heard of and perhaps looking at the building, this is not only his “first” building in Latin America, but perhaps could also be his last!!!!! The idea for this museum was thought of back in 1999, but it wasn’t completed and opened until 2014, no surprises for the delay there then! As Christine said when she first saw this and pointed me in the direction of a shantytown: I am sure the museum is worth visiting if we could though.

We arrived at the first set of locks, The Miraflores and Pedro 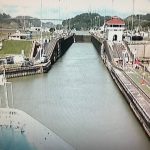 Miguel locks; 3 in total raising us 85 foot above sea level. The ships seem to just fit the locks and are held in place by 4 motorised “Mules”, special locomotives built exclusively by Mitsubishi for the Canal. Alongside these locks is the Canal Museum, a much more 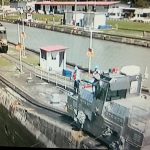 The mules steadied us in the locks 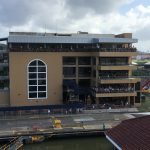 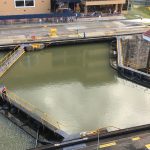 Two gates for safety on way out of locks

going through, our ship wished them a happy Xmas, and we got an enormous cheer[/caption]conventional building and more in keeping with the area.

I have now been through this canal 3 times and still I marvel at the extraordinary engineering lengths the builders went to back in the construction days, bearing in mind “their technology” of the day. It stands testament to their skills that the locks etc., are still working today. Even the concrete laid back then, though a little battered, has stood the test of time.

It was a very sunny and hot day as we meandered through the “cut” and across the Gatun Lake watching the countryside and wildlife, including a couple of crocodiles as we passed by. This man made lake provides all the water necessary for the canal and the lake is filled with all the rain there is around here, and will continue to do so as long as the rain forest stays in tact. This lake also provides the 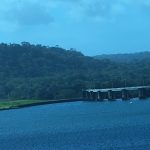 power needed through turbines below one of the dams, generating electricity.

About 5 hours later we enter the Gatun Locks and drop back down 85 foot to sea level then out into the Caribbean, past Colon, the complete transit, all 77 KMs (48 miles) took about 7 hours. For those who would like to know more about the history and facts about this wonderful engineering enterprise, here are three (of many) useful links:

In between watching everything we manage to “sit-&- 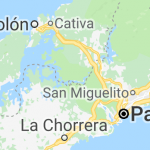 Map of the Panama Canal

tan” have a swim and experiment with rum punches before heading to the room prior to visiting the dining room.

After another excellent meal we retired to our cabin and played Crib as the show tonight didn’t appeal and besides it is very tiring watching things happen in the Panama Canal.

We woke up late on this 3rd sea day; we have very thick curtains across our porthole so with no light, we just slept on! Anyway we had to put our clock on one hour during the night but when we woke we weren’t sure which clocks were right so we switched on the TV to the “map program” the channel that gives us all the facts including the ship’s time. Gosh it was after well after 9 and weren’t dressed, and if we wanted breakfast, we had missed the Grand Dining room but if we hurried we could make the Buffet before it closed at 1000hrs. At this point we knew we were told to put the clocks on 1 hour but the ship clock showed they should have gone on 2 hours. Anyway as we came upstairs we noticed the Dining room was still open, so went along and asked if we were too late, of course not came the reply so we asked the correct time, 0830 Sir, and that was on the ships computer. When we got back to the room they had altered the ships clock on the map channel. Their mistake and we panicked for nothing, the main reason was for this was we were having a question and answer session with the Captain, the Chief Engineering officer and the Hotel Director and this started at 1000hrs.

The weather today wasn’t up to much this morning, the doors to the outside decks were closed off, the pool had been emptied the sea was a little rough, though Christine was convinced the waves were very high, still it was chores day, Christine did the washing and ironing, I helped with the fetching and carrying and all was soon done. Apart from eating, drinking playing games, we had a quiet day until dinner.

After dinner they had a musical show, singing and dancing that we both agreed was good, the background to the show was the last night of prohibition in the US and all the songs were from around that time.