It was now early Sunday afternoon and we set off to find where we could catch the City Tour, Hop-on, Hop-off bus. After consulting Google we headed straight to Oxford Castle as the stop was right outside. Fortunately, on the post was the information we needed, start time, cost etc. The weather had now improved, the sun was shining and it was warm, quite a contrast from this morning so whilst at the castle, it made sense to go and visit it. 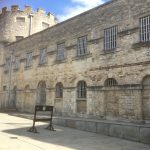 The strategic significance of this place is its defensive position as it was another natural river crossing, but here it was used particularly for Oxon, hence the area was originally called “Oxonford”, now known simply known as “Oxford”. This castle has witnessed 1,000 years of history; stretching from Anglo Saxon times, through the Norman Conquest; Empress Matilda’s base, and King Charles 1 moved his court here after being thrown out of London by the Parliamentarians. At that time it became a brutal prison for captured parliamentarian soldiers. 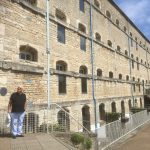 Hotel now, but was the prison

Following the civil war the castle continued as a prison; through the Victorian age when enforced, meaningless “hard Labour” tasks were performed, until various prison reform acts kicked in and softened their regime. The prison continued until it finally closed as HMP in 1996, and 10-years later the prison it re-opened as the Malmaison Oxford, 5* Hotel.

Obviously Oxford castle is a tourist trap but very well done and presented by “extremely knowledgeable” guides who certainly knew their history. Part of the tour was through the 11th century crypt chapel 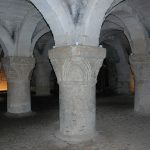 (restored 1794). This was built by a rather nasty, sadistic and brutal Norman baron, “Roger d’Ivry” who, after committing many dreadful deeds had a guilt conscience following a dream and not only did he build this chapel, in 1074 he filled it with a number of priests teaching various subjects, and this became a place of learning, the first “Oxford College”; the early beginnings of the University.

Through the early middle ages, the castle had been improved and enlarged but after the Civil war, Oliver Cromwell systematically destroyed castles across the country and Oxford Castle was no 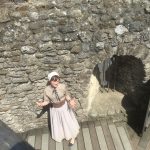 Our guide, who even inspired me!

exception however, for whatever reason they left “St. Georges tower” intact. There are 101 steps to the top; Christine went up them all. She said that not only were they very steep, but it was also very claustrophobic going up, still she enjoyed a great view of Oxford from the top. I elected to remain at the 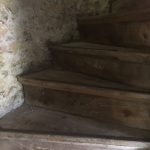 101 steps that were very clostophobic

bottom. St. Georges Tower is a grade 1-listed building, and the original motte is a Scheduled Monument.  After our visit we enjoyed a fine afternoon tea in the castle grounds.

Back to the boat for an earlyish night as we need to get going in the morning to get our “monies worth” with the tour bus!

We duly arrived at the appointed hour but needn’t have rushed, the bus was late, still we boarded and bought 48-hour passes.   As usual, we decided to do a full circumnavigation of Oxford to get our bearings before deciding what we wanted to see. The tour took a little over an hour to go around but half way through a guide came aboard and took over the commentary and told us he was conducting a short walking 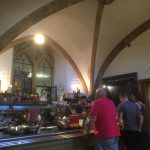 tour as part of the deal, this we joined though it covered many sites we had done the last time we were in Oxford. Never mind we enjoyed a welcome mid morning coffee and “bun” in the Crypt of “St Mary’s The Virgin” the University Church. This was followed by a visit to “Christ Church College”.

Henry VIII founded Christ church in 1546, and it is one of the largest, 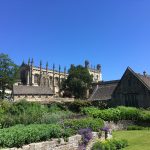 and the 2nd wealthiest college of the university. It has the biggest quadrangle in Oxford and the impressive tower at the main entrance was designed Sir Christopher Wren. It is here, in the very beautiful and colourful College grounds that “Oxford Cathedral” is located and this was to be our first stop.

The first thing to strike us was its size, though it may not be as grand 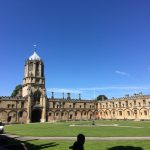 or as big as other cathedrals, it is in fact one of the smallest in the UK, it is still pretty large and very impressive. The Cathedral was originally St. Frideswide’s Priory but was changed to a cathedral with Henry VIII’s Charter of 1546. We joined a tour guide and listened to the history, stories and legends appertaining to this cathedral across the centuries, fascinating stuff.   Whist at the college 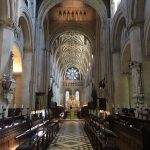 we wanted to visit the “Great Hall” but unfortunately it was closed for students’ lunch, so we decided to come back later.

In the course of conversation a few days or so earlier, it came to light Christine hadn’t ever been punting on the river, and therefore this omission just had to 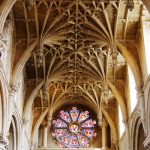 Part of the ceiling and stain glass windows

rectified, and I was the person to do it, and said so whilst we visited Oxford.  Many moons ago I lived in Cambridge and had been punting many times on the River Cam, unfortunately the last time was in 1982, 36-years ago; had I dropped a “big one” thinking I could still do it? Moreover, was I fit enough to do it still?   Had my ego taken over? As we approached the “boats for hire” sign, I couldn’t back out, my pride wouldn’t let me!! 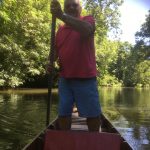 My driver! He did very well

still wondering if I could “really” do this “punting” lark.   I followed, brimming with confidence, given the long pole then pushed off the jetty; we were on our own. Firstly we had to manoeuver a 90-degree turn and navigate under a stone bridge, so far so good, we were going well and we even had the confidence to take ‘photos. When we were ½-way into our 1–hour Enjoying my time on the river

hire, we turned round to head back and that’s when my skill was put to the test. We came across numerous punts full of students who were all well oiled and hadn’t got a clue. They were straddled across the river, going in all directions, and without any cares in the world but thoroughly enjoying themselves after all their exams. Under these extreme conditions I lost my rhythm and had a few hairy moments of my own, still we prevailed, cleared the congestion and got back on track. The remarkable thing was that even with these holdups we were back on the dot, 1-hour later. By now my shoulders, neck, arms and most other parts of my body ached, pain killers for me tonight I think.   Anyway I fulfilled my obligation to Christine.

Back on the Hop-on, Hop-off bus and we returned to Christ Church to 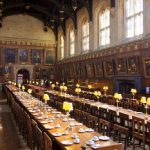 visit the Great Hall. This time it was open and as we already had tickets, avoided the queue waiting at the ticket booth. This magnificent Great Hall is accessed up enormous stone steps and has been in existence since the 1520. Today members can eat three meals a day but at the second dinner sitting, everyone has to be in formal dress, i.e. gowns etc. This magnificent hall, with its high table looking down on all the members eating, then “everybody” being watched by all the college deans, from their portraits that hang round the walls is quite a place.

Back onto the bus, it was time to eat so headed for Zizzi’s; though part of a chain, we find their food more than acceptable and they have “Frascati” on the menu!!!!

Monday morning and we watched a film unit setting up their equipment on the other side of the canal. Christine thought she recognised the actor but couldn’t think of his name. We were 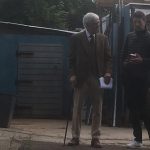 Who is this actor? Does anyone know

speculating as to what programme they were filming but were way out, we found out later it was a German film unit making a German TV programme.

We headed back to the Hop-on, Hop-off bus, not only is it a tour bus, but we also use it as a means to get around, and our first stop was “St Mary’s The Virgin”, but only after a quick cuppa in the Crypt Vaults Café, again!!!

There has been a church on this site since Anglo-Saxon times but was adopted by the university in 1252 and it also became a place of teaching and the seat of the university government. Historically it was 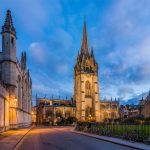 Some of the beautiful buildings

also used for lectures and where the degree awards were handed out. This church was also the site of the 1555 trial of the Oxford Martyrs, i.e. Archbishop Crammer, Latimer and Ridley, they were tried for Heresy and burnt at the stake just outside the old city walls.

Next we visited the Sheldonian Theatre built by Christopher Wren between 1664-1669. This is a unique “D” shaped building used is for concert recitals, degree awards, lecturers and much more but the best parts of this theatre the ceiling and the tower. The ceiling is made up of 32 individual hand painted 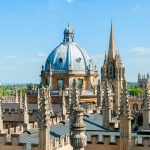 panels by a fellow named “Robert Streater” and they were all done in London before being taken down to Oxford to be fitted, quite magnificent. The Green “Cupola Tower” has amazing 360-degree panoramic views of the spires of Oxford and well worth the 100 or so steps to get to the top. These steps were easier than the castle tower so we both went up; again another excellent visit. 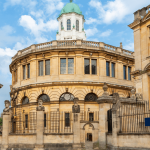 The Sheldonian Theatre is a grade 1 listed building and has been described as one of architectural jewels of Oxford. 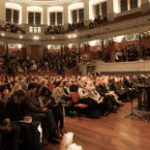 HOHO bus back to Meg. We had exhausted our 2 free nights mooring and didn’t want to pay £25 for a subsequent night so cast off and headed north.

For some unknown reason the water in the canal was flowing very fast and worse, the water level was very low so we had to be careful not to go aground. Arriving at the next lock, we had thought things would have changed, but no. We passed “Dukes Cut”, the other channel into the Oxford canal from the Thames and into our third lock; fortunately we found more water then which was comforting.