Having slept for nearly twelve hours, hopefully I will be refreshed for lots of walking.

We went down for breakfast, where most of the rugby crowd were eating, we will find out more later this evening, changed into walking shoes and made our way to the Colosseum, which was only 2km away, and with the help of the satnav on walking mode we got there. 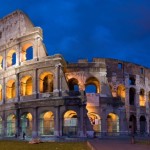 The crowds were massive, obviously with the big match tomorrow, Rome was full to bursting, we found ourselves a guide, paid our monies, and set off. Richard our guide was an old school teacher, he had a scruffy beard, dirty clothes and rotten teeth, but he knew his stuff. 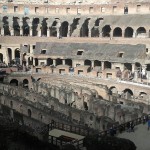 It would not be wrong to say that the Colosseum is one of the most important buildings of Rome. Earlier on, the building was known as the Flavian Amphitheater, which was built on an artificial lake from 72AD to 80AD. The building was made as a place where the Roman Emperors could see the gladiators staging death battles with each other and 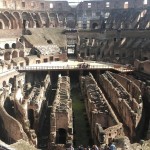 Looking down at all the corridors underneath, the stage covered all these opassages

The Colosseum was also used as an arena to entertain the people with free games, as the games were considered a sign of prestige and wealth. The emperors made sure that the public was entertained because it increased their popularity. It is said that these games were sometimes held for several days, and the rulers also took part in it. 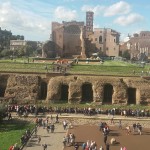 The beautiful building is more than 159 ft high and has around 160 statues on th upper floors. when it was initially built it could accommodate more than 55,000 spectators and had around 80 entrances. The colosseum was covered in velarium, because that provided shade to spectators from the sun. The building might have fallen into ruin, but the remains are worth a visit. 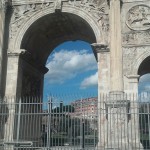 One of the four arches stil remaining in Rome

We then went onto one of the famous arches, which was like the Arch De Triumph in France, and then to several other sites of interest. 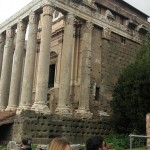 Some of the ruins next to colosseum

Having walked our socks off, we then stopped for some lunch, 3pm which was lovely, I had a very tasty Tagittella with Salmon, if was so tasty, Geoff had Spagetti with mixed fishes, which he also enjoyed.

Time is moving on, so we went back to the hotel where we watched France beat Ireland, and then went on to join Couch and his team fo drinks and watch the Scotland vs Wales, Wales won which pleased Geoff. After several free drinks we left there and slowly walked to the Trevi Fountain. 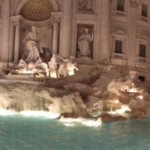 This beautiful fountain was constructed in 19BC by Emperor Augustus’s son in law, Agrippa. One distinctive feature about the fountain is its size, as it is 65 feet wide and 85 feet high, and is the biggest fountain in the city.
Trevi’s design has been changed several times since it was built, and the fountain is shaped like a triumphant arch, which occupies more than half the square. The main figure is Neptune, which is located right in the centre and is the God of the sea. He is seen riding a chariot that is being pulled by two horses. On the left side of the figure, there is a statue which represents Abundance, whereas the statue in the right represents Salubrity.
We tossed our coins into the fountain with our backs towards it, and made a wish, I was absolutely stunned by the beauty of this fountain, apparently it has just been restored, it was fantastic. 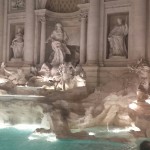 We then meandered home I am absolutely whacked , and fell straight to sleep.
This entry was posted in Italy, Rome. Bookmark the permalink.