This morning we decided to go to Colico, which is North East side of the Lake. so after walking the dogs, we were out on Pinky and Perky again.  The roads were still very tiny, with the villages on a traffic light system.  We stopped to get some petrol, but of course it was Sunday and everything was shut, we thought no problem, we can use our card, and fill up, but no, still everything is cash, well we had a 20 Euro note, but that was too big for my little thing, so we had to wait to get some change. 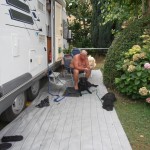 The reason we went to Calico was because there is a campsite there, and it was easier to look at it on the bikes, then take Rosie, and not like it. After many tunnels, and tiny villages, and about 45 kilometres, we found the site, well I did not like it one bit, although they had a beach across the road, and a nice cafe, we have decided to stay where we are.

Back on the bikes, we managed to fill up with 5 Euros of fuel, then back to Rosie, where we had some lunch, then went for a walk down to the lake.

When we arrived, there were lots of little stalls, selling beefburgers, cakes, etc., there 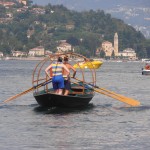 was a   regaté going on, the boats are really strange here, and I am sure they have a proper name, but they take two rowers, standing up, facing forward, it looks like hard work to me.  They were having club  races, everyone was enjoying themselves. 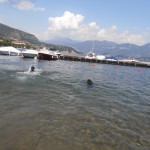 Sooty and Bella were doing their normal things, although not to be outdone, Bella is also diving under water and collecting stones, this looks really funny, on one occasion she picked up a really big stone, how she managed to get it out, I will never know.

Back home we opened a bottle of bubbly, and had some salmon, I like this retirement business, it is hard work but worth the effort.