No rush to get up for breakfast this morning, as we weren’t due to arrive ‘till around 1100hrs. Sometime before 1100hrs the Captain came on the PA apologizing to the fact we wouldn’t arrive now ‘till nearer 1300hrs: the ship had been hampered by currents and adverse weather conditions trying to slow the ship down, successfully as it seems!!! Naturally being a port day there were few, if any, activities so they hastily arranged a few things, one of which I attended. It was a lecture on the 4 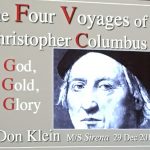 voyages of Christopher Columbus, www.history.com/topics/exploration/christopher-columbus , called the 3 “G’s”: for God; for Gold; for Glory, and it was an hour well spent. There is a follow-up lecture tomorrow; I’ll be there. 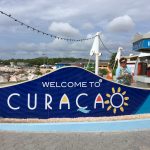 We arrived at the dock in Willemstead, Curacaco, one of the A B C Islands in the Dutch Antilles and went ashore. Our one main aim today was to find a nail place to get Christine’s nails 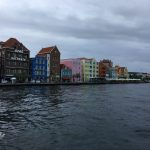 Beautiful painted houses rows and rows of them, keeping up the tradition of the town

sorted. The ship wanted $105 for what she gets done in Pilar for €20 and after some wandering about and asking people we discovered one in the middle of town who said she could do them straight away, yes a success “AND” only $20, what a result that was, and when she came out they looked very nice. That was the good part of the day, the bad part is that Christine has had a nasty niggling cough for the past 10 days or so, and today it seemed to be a lot worse. Now bearing in mind she has a bit of a history of pneumonia I said that she was going to see the ships doctor when we get back and that was that.

Unfortunately we didn’t get to see everything in Willemstad but we did go over the Queen Emma Bridge; this is a floating 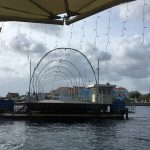 Pontoon pedestrian bridge, originally built in 1888 but renovated in 2006. This bridge connects the two halves of Willemstad: Otrobanda, the side our ship is docked and 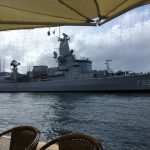 Dutch navy in town, bridge opened to let them through.

Punda, where the old part of the town is 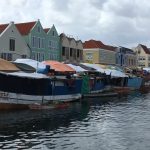 Floating market with stalls in front

situated, and where we were headed. The other site recommended to see was the floating market, well this was a disappointment, yes it had beautiful fruit for sale but all the stalls were on the quayside with old boats behind, the “floating” part I suppose. 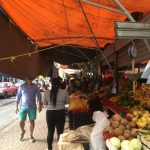 After nails and before venturing back to the ship we stopped 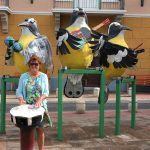 Me playing the drums!

for a drink on the riverfront and was there when they swung the pontoon bridge open and let a Dutch Navel Frigate sail in, they then closed it again. Interestingly, when the bridge is out of use, the old ferry takes over and once the bridge is swung back, the ferry ceases. When we decided to return we took the ferry, anyway it made a 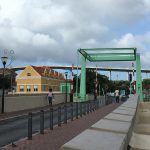 One of the many bridges in town

Back on board and straight to the doctor and after a full examination confirmed it was just a bad cough, it hadn’t gone south into her lungs, told her to not be close to people, gave her some pills and masks, and me a bill for $304, ouch! Anyway if it stops her coughing it will be money well spent.

We were going to the specialty restaurant, Red Ginger tonight but under the circumstances had to cancel so a quick trip up to a quiet corner on the outside deck of the buffet instead followed by an early night for Christine whilst I caught up to date with logs etc.,

Tomorrow is another sea day before arriving in Barbados.

This entry was posted in Curaçao. Bookmark the permalink.