After the jubilation of yesterday, it is time for some serious sight seeing.  We are also meeting Trevor, Louise and her two girls and joining them with the private guide they had booked.

After breakfast we walked down to buy a 48 hour ticket on the “hop on, hop off” bus, and then we were off.

Our route took us back up our street, passing our hotel, through the well preserved city walls built between 271 AD and 275 AD by the Emperor Aurelian to keep out the Barbarian tribes out who were fighting their way south.  We then headed back into the city, passing our hotel again, (pity there wasn’t a stop outside!) and into the Plaza Bernini, a beautiful area with a magnificent fountain as its center piece. Our next port of call was outside Rome’s modern train station, we had been here before, ha ha! But more importantly, the other end of this large area are the remains of the Diocletian public baths, back in the day, they could cater for up to 3,000 people bathing at once.  We next stopped at the Brasilica Santa Maria Maggiore, this we will visit tomorrow.  Our next stop was the Colosseum and the surrounding area but as we had visited this on Saturday, didn’t feel we needed to repeat the experience.  We then headed out towards the Vatican City and St. Peters Basilica where we had arranged to meet Trevor and Family, passing along the way the great white building with 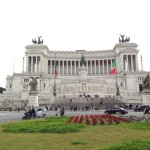 the white marble facia, a Monument to Vittorio Emanuelle 11, containing the tomb to the unknown soldier and known locally as the typewriter or the wedding cake;  Apparently hated by most locals, though a very imposing building none the less.

This year is a Jubilee year at the Vatican and therefore our bus by-passed  St. Peter’s square and dropped us off at the  “Ponta Saint Angelo”  Bridge which leads to the entrance to “Castel Saint Angelo”, an imposing round, well fortified castle used by some popes to hide in during early troubles.  Around this castle and straight into the Via de Concilliazone, the road leading straight up to Piazza San Pietro, St. Peters Brasilica.  We were early so stopped for a coffee etc.

We finally made contact with Trevor who was in another Pizza Restaurant So hurried to join them for a quick Pizza before tackling the Vatican Mueseum, Cistern Chapel and St. Peters Brasicila.

A little later than planned, we met up with our guide “Marina” and after going through airport type security, entered the Vatican.  Firstly we were informed we were in a sovereign state, not Italy, and that the official language is Latin; they also have there own postal system with their own stamps.

Plan of the Vatican’s Area

When we left the hotel it was raining so I brought my new brolly with me but security wouldn’t let me enter the Vatican with it and told me to leave it with Security for later collection.  Unfortunatly we will be exiting the museum the other end and without a lot of extra walking, we would not be coming back, so my new umbrella had to be left, the second in 3 days!!

Anyway back to the Vatican Museum, we walked through some amazing galleries, each

one displaying grouped artefacts, not all jumbled together.  We walked through a gallery of amazing statutes, some in excellent condition and others not so good.  What probably took our breath away was  how detailed many were but more amazing was the tender age of some of the sculptures, talk about old heads on young bodies, quite striking.  Another long gallery had walls covered in frescos of each region of the Italy.  As you walked through, on the right hand wall were all the regions on the Adriatic and on the left hand

side were all the regions on the Mediterranean, they were all in the correct order but more importantly they were painted about 700 years ago yet the accuracy was astonishing.  Another gallery was all tapestries, these were again many hundred years old and had been woven with gold and silver thread amongst other threads to bring them to life.  These Tapestries were woven in Flanders from paintings done by a number of famous painters of the time. 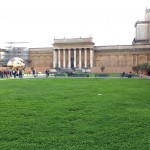 An Internal Space for entertaining large numbers of visitors

We then entered the private rooms of Popes gone by.  Again the walls and ceilings were all frescos depicting various stories from the Old Testament as well as many of the atrocities committed upon the Christians at the birth of Christianity as well as several battles that took place.  Of These 4

rooms we went through, one was completed by Raphael in person but the other three were painted 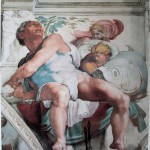 One of the many Frescos

by his students after he had died, none the less they were very good.

As I said earlier, much of the museum was closed so we now moved into the Cistern Chapel.  The Chapel was built in its current form by Pope Sixtus IV between 1477 and 1480 and all the frescos around all the walls were painted by a team of many well  known artists of their day and they were all completed in 1482.  The ceiling was not painted until Pope Julius II got Michelangelo to create his masterpiece.  It took 4 years to complete, (1508 to 1512) and all this work was done by Michelangelo lying on his back.

Trevor booked this tour for himself and Louise who also brought her two little girls Georgie aged. 11, and Heidi Aged 9.  This has been a very long tour for little ones especially for Heidi as she has a bad ankle and is walking around on crutches.  I think they were magnificent, they didn’t complain once when clearly towards the end they were very tired and probably bored, well done girls.

Bearing this in mind, our next part of the tour was the Brasisila of St. 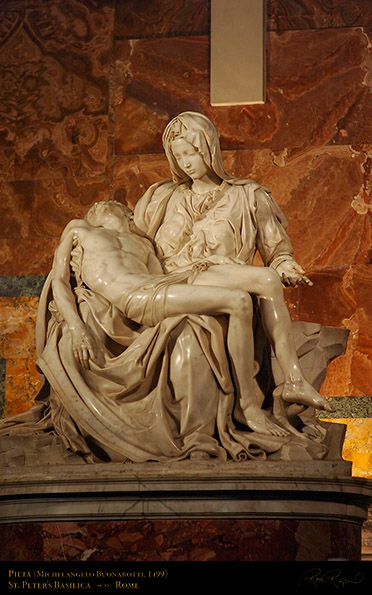 Michelangelo’s Sculpture of The body of Jesus in Mary’s arms. (created by Michelangelo when he was only 23.)

Peters, a most imposing building with a wonderful piazza in front surrounded by 284 Columns.  Inside is vast and you could spend a whole day inside to do it properly, but now, for us, a quick feel of the grandure and a couple of significant items to look at.

The enormous great alter with its canopy held up on 4 great columns sits above the remains of Saint Peter himself, (though they are about 30 meters deep.). There are about 100 Popes entombed in this place a couple of kings and Christina, Queen of Sweeden in 1689 having relinquished her throne to devote her life to God.   Also buried are the last three Scottish Stuart’s,  who all claimed the English crown but were defeated in what is know as the Jacobite Rebellions.  There is also a Monument to them. 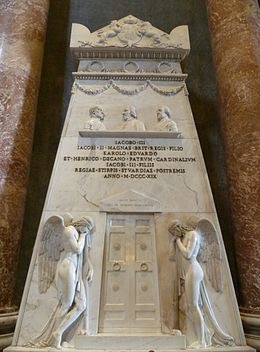 By now even Christine and I were flagging, it had been a very long day and we were exhausted, so after agreeing to return to their rented apartment a couple oh hours later we boarded aou bus and back to the hotel.

After a rest and showers we jumped into a cab and headed off to the Trevi Fountain, where they were staying.  Met Trevor who took us into he flat where a few glasses of wine went down very nicely before the six of us went round the corner for dinner.  After an all right meal we stopped of for Ice Creams before returning to the flat for night caps. 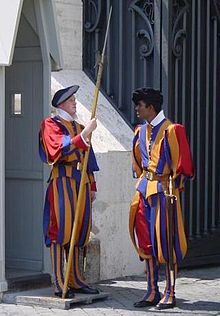 After saying our God byes we felt up to walking back to our hotel and into bed, exhausted.