Up early walked the dogs, I did not want anyone in the office to see we had two dogs, we are paying nearly 40 Euros a night, which is scandalous, so don’t want to pay anymore, we will be moving as soon as we have completed Pisa. The big plus is we can walk from here to see the sights. 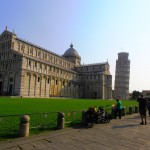 Cathedral and Tower at Pisa

We left about 9.30a.m walked through a tunnel under the railway line, past all the stalls selling their souvenirs, and into the walled Piazza Dei Miracoli.  The Piazza’s expansive green lawns provide an urban carpet on which Europe’s most extraordinary concentration of Romanesque buildings – in the form of Cathedral, Baptistry and Tower – are arranged. Two million visitors, every year mean that crowds are the norm.

We visited the Cathedral, this was first started to be built 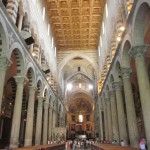 in 1063, and continued until the 13th century. The elliptical dome, the first of its kind in Europe dates from 1380.  The buildings striking cladding of alternating bands of green and cream marble became the blueprint for churches throughout Tuscany. The wooden ceiling decorated with 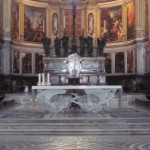 24-carat gold is a legacy from the period of Medici rule of the City.

The Tower was started in 1173, and then ground to a halt a decade later, when the first three tiers were observed to be tilting. In 1272 work started again, with artisans and masons attempting to bolster the foundations but failing miserably.  Despite this, they keep going, compensating for the 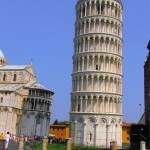 lean by gradually building straight up from the lower storeys and creating a subtle curve.

Over the centuries the tower has tilted an extra 1mm each year. By 1993 it was 4.47m out of plumb, more than five degrees from the vertical.  The most recent solution saw steel braces slung around the third storey that were then joined to steel cables attached to neighbouring buildings. This held the tower in place as engineers began gingerly removing soil from below the northern foundations. After 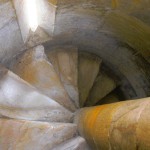 some 70 tonnes of earth had been extracted from the Northern side, the tower sank to its 18th century level and, in the process, rectified the lean by 43.8m.  Experts believe this will guarantee the tower’s future (and a fat tourist income) for the next three centuries.

As there are 300 steps inside, Geoff has declined going up, (he is also not feeling well) if you suffer from giddiness 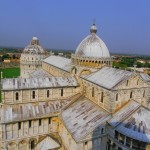 (which he does) or have heart problems, they say do not go up.

I bought the tickets, and it was very well organised, they only let 40 people in at a time, and on the ticket is the time 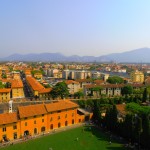 View from the top

you can go in. So I went alone, I had no trouble with the steps, but it was very claustrophobic, especially when people started coming down and you had to pass each other.   I walked all around, and you had fantastic views from the top, we were then shown more steps, which were very narrow, and even more claustrophobic, (Geoff would have hated this) when we 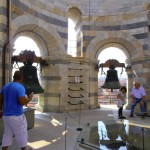 arrived at the top there were six huge bells, and several small ones, I felt wobbly at this point, so had a quick look around, and climbed down again.  Glad I did it, but do not feel the need to do it again. I joined Geoff for a drink, and 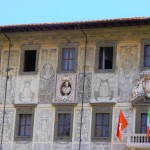 Part of the University of Pisa

we then took a horse and cart ride around Pisa itself, which was very good, with the guide pointing out the points of interest on route.  We couldn’t always understand her, but we nodded in agreement. 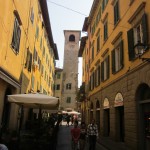 Next onto the Baptistry which was completed in the 14thcentury, there was a beautiful hexagonal pulpit, with amazing carvings on, and whilst we 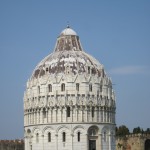 were there a custodian demonstrated the double dome’s remarkable acoustics and echo effects.

Midday and we have seen enough of Pisa, so we headed back to the campsite, had a quick lunch, and managed to slip out just before the start of another day. (2pm)

We went looking for another site, but just couldn’t find one suitable, although we have this year’s Aries book, it seems it is totally out of date, we worked our way further and further away from Pisa but the only ones available were 40 Euros, and we decided we could not afford to stay there waiting for Jane to arrive.

Eventually we ended up in Sarzana, which is near La Spezia, a delightful site, which is 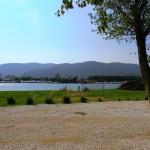 almost empty, on a riverbank.

We put the ground sheet down, plugged into the electricity, and then went to do our emails, three campari spritz later, we left the bar, but at least Geoff is far more relaxed, and forgotten how bad his back is! We had an early night, after we had played a few games of crib.