We had a leisurely morning at sea en-route to Charleston. I went to a lecture in the morning while Christine read, and did some laundry.   The lecture I attended was given by a retired customs officer under the title; “40 years of catching smugglers”. The speaker, Malcolm Nelson, certainly opened our eyes to what trouble smugglers go to, and what tricks Customs and Excise employ to catch them, not only was this lecture a real eye-opener, the speaker was very witty and had the biggest audience I have seen at a lecture on board, we were mesmerised. After an early “light” lunch, we played “Shuffleboard” with Elaine and Dave and had a good laugh, mainly due to our poor play.

We are overnighting here in Charleston so we can enjoy the 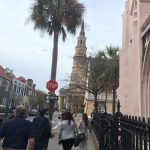 nightlife today and take in some cultural and historic places tomorrow before leaving around 1400hrs.

The four of us left the ship around 1600hrs to wander, and look around Charleston. We knew it was an interesting, historical, and pretty place so were keen to get going and especially to see the “Rainbow Cottages”, a row of terraced 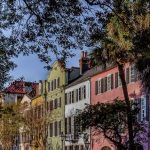 Walking past the security at the end of the pier, we noticed a 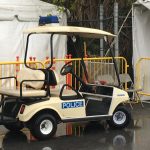 Can you imagine being chased by this!

novel and unusual of bit of kit, a “police Golf Cart” complete with a blue flashing light mounted on the roof; they’ll struggle to catch speeding motorists with that!!!!!

Charleston, in South Carolina was founded in 1670 as Charles Towne, honouring the English King, Charles ll. Its initial 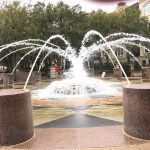 location at Albemarle Point on the west bank of the Ashley River now known as “Charles Towne Landing”, was abandoned in 1680 to its present site, and this became the fifth-largest city in North America within ten years. All this happened in spite of suffering an outbreak of yellow fever, smallpox, a major fire that devastated a large area and finally an earthquake; not to mention hurricanes.   And even though the pirate “Blackbeard” held Charleston to ransom in 1718, the city had a growing reputation as a cultural centre and for the “the good life”. 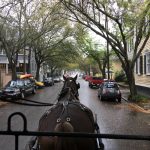 Many of the tree lined streets with their cobbled road and terraced houses looked quite English. There were many cobbled streets in the old town and they were built from the stones used as ballast in the old wooden sailing ships and they don’t look worn at all after 300-years.   When we found the Rainbow Cottages we were rather disappointed, yes they all looked very nice, but we were given the impression there was a whole street of them, not just about 8, in a row, on just one side of the street.

After a couple of hours of mooching around, we came upon Every city we go to, there is always an Irish bar!

“Tommy Condons”, the only Irish Pub, so naturally the Guinness called and to add to the ambience, it was all decorated ready for St Patrick’s day festivities later in the week. This brought back fond memories for Christine and I, as last year we were in Dublin over the St Patrick’s weekend; what a good time we had!!!!!! After the first round of drinks had slipped down so easily we decided “Pub Grub” was the order of the day so the 4-of us dined there as well. 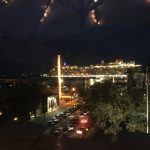 It was dark when we eventually left the bar and Dave and Elaine decided to return to the ship whilst Christine and I continued wandering about. We were minding our own business when we suddenly clocked a number of sun umbrellas, all decorated with fairy lights, high above us on the roof of a building. Naturally we went to investigate, and walked into the appropriate building that turned out to be a rather posh hotel with an expensive looking restaurant, still, undeterred and looking confident, walked in as if we were regulars, straight into a lift and pressed the top button. We stepped out onto a rooftop terrace with a bar and swimming pool, and of course those lighted sun umbrellas and we were overlooking the Queen Victoria. What a pleasant place to have a few “more” drinks before walking back to the ship.

Christine and I went ashore around 0900hrs this morning and 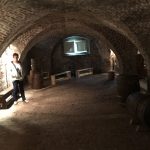 Down in the dungeons

headed towards the historic Old “Exchange and Provost Dungeon”, historically one of the most important buildings in Charleston, it was the Exchange and Customhouse built by the British in 1703 and is the oldest building in the town. It served as a prison for American 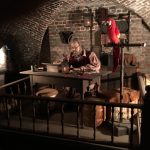 Patriots in their war of independence; today this is a museum and we were going to visit.

It was a good, albeit short visit where there was so much history about the British, the war of independence, the 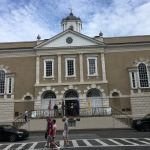 American constitution, the civil war; too much to absorb in the short time we were there; perhaps some time in the future, who knows.

Charles Towne changed its name to “Charleston” in 1783, after the war of independence.

Fort Sumter built on a man made island in the entrance to Charleston Bay, (somewhere I wanted to visit but time was against me) was where the first shots of the American Civil War were fired on the 12th April 1861. 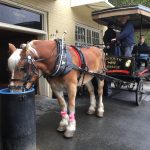 After our museum visit we headed back to the old market area and bought tickets to tour round parts of the town we hadn’t been to. Our mode of transport was a horse and cart, though this cart had seats and took 10 passengers. It was an hour well spent and we had an excellent guide. The only downside was it rained, hard at times and though there was a roof above us all, the rain came in the sides.

Back to the ship now with little time to spare, and it wasn’t long before she started to let go her lines. Back to the cabin for a shower to warm up followed by a snack up in the Lido.

We went down to dinner tonight to be sociable rather than to eat and this was followed by the evening theatre show, a chap called Mark Shortland. Apparently he was a magical “champion”, whatever that is but he engaged the audience with un-believable magic, comedy and audience participation. I could not do justice to him by trying to describe his tricks, so I thoroughly recommend everybody, if they see him on anywhere, to go.

After a superb overnight in Charleston we were quite tired so retired.

This entry was posted in South Carolina. Bookmark the permalink.