Lechlade back to the Oxford Canal

Old Father Thames sits
On the first lock we entered.

We decided to head back today, we were away by 9.30am but no sign of the farmer who collects the moorings, so a free night! We meandered along the river, but this time we were not fighting the current, we made far better progress, in fact instead of stopping at the Trout Inn again, we actually made Eynsham Lock. We did the normal, filled up with water, we spoke to a young trainee lock keeper, who was thoroughly enjoying his new job, and wished him well, and we spent the night here. In the morning before we left, we did the rubbish and the looe, then headed off. When we arrived at the first lock, there were two other boats so we joined 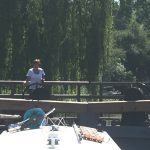 Me working the locks on the Thames.

them, and low and behold our trainee lock keeper was at this lock today, such a lovely friendly fella. We travelled on, to next Lock where we were told not to attempt to go in together, so I worked the locks for the other two boats, only to find the simple push button did not work, so I was left turning a wheel by hand, another young lad felt sorry for me and came and helped me and we finally were on our way.
We reached our entrance into Sheepwash Channel,and turned into it, 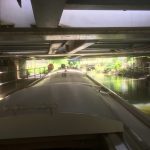 it was a very narrow channel, with low bridges, I wondered if we were doing the right thing! Apparently this cut through to the Oxford Canal was only done 60 years after the Oxford Canal was opened. The channel is less than a mile, and we quickly turned and into the first lock, where we moored to explore Oxford. 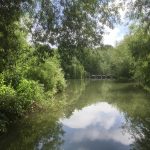 Lovely view as we entered the Oxford Canal.