During the night we crossed the tropic of Cancer, so it’s official, we are now out of the tropics and will be ‘till we go somewhere else in the future.

We arrived in Port Everglades, just outside Fort Lauderdale, in the wee hours of the morning but emptying the Q V out didn’t start until 0700hrs.

For the first time we had breakfast delivered to our cabin, not quite the same, but convenient as today we were meeting Dave and Elaine at 0830hrs to try and get ahead of the masses at US immigration. We all know by experience when up to 2,000 people leave the ship; the end of the queue takes well over an hour just to get to the desk, we were going to be up-front, and we were!! 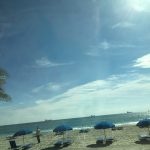 On route to the Mall

We boarded the shuttle bus, which took us to the “Galleria Mall”. We arrived at 0945, 15minutes before it all opened; Even leaving early this morning I don’t think any of us envisaged getting to town so early, but, surprise surprise, we were through immigration in double quick time, that’s a first.

Elaine had done some investigation and suggested we boarded the hop-on hop-off water taxi, which had a stop at the hotel next 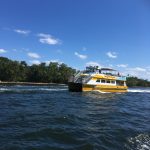 The water bus we travelled in

door. After a welcome cuppa in the Mall we bought our tickets, $5 per person discount for pensioners, and hopped onto the first boat that arrived. We went through many of the waterways and canals 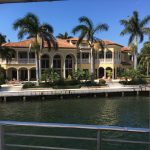 passing homes that start around $2-million and heading north of $35-million and alongside most of the waterways were super yachts, the like off which, you 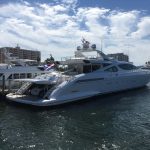 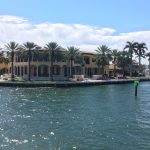 Fantastic homes on the waterside

Amazing[/caption]wouldn’t see in such quantity in other place. The round trip took about 3 hours but we could swap boats and travel further north, Christine and I elected to do so while Dave and Elaine went back to the mall to warm up. Yes there was quite a chill in the wind on the waterway system.

There isn’t a lot of history to Fort Lauderdale other than the Seminale Indians, who were “forced” to live in this area early in the 18th century together with a few white settlers. In 1835, a second Seminale war broke out as a result of a massacre of an army detail by the Indians. This was 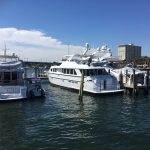 Some of the smaller boats, lovely day on the river

followed a year later by a family also being massacred by the same Indians which, in 1837 prompted a Major William Lauderdale being sent with an army to build a fort here. This became known as “Fort Lauderdale”, named after the Major.

Today this area is known as the Gold Coast and the Venice of the USA because of its many waterways and long sandy beaches. 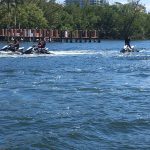 Lots of jet ski’s on the waterways

Port Everglades is the second busiest cruise port in the world after Miami.

After completing the round tour on the water we headed back towards the Mall but en-route decided we would visit “Publix” (a large supermarket chain) to buy tonics and wine. Walking towards the entrance we came across a hairdressers so I popped in for a quick haircut, $20 instead of $100 on the ship. It turns out this shop had already had about 20 men from the ship for haircuts today.

A quick snack was followed by a visit to a men’s shop where I bought yet another jacket, before boarding the shuttle back to Q V.

Tonight we met our new dinner companions, a couple from Florida: too early to know them yet!!!!

Tonight’s show was the comic juggler, Pete Mathews; apart from the usual balls and clubs, he juggled 3 axes and as his finale he sat on a very tall monocycle and juggled 3 big sharp looking knives. He was very entertaining but again he stretched his 30-minute performance into the 45-minute slot he had. He padded out his performance by thanking the band on numerous occasions and joking with the audience.

We circumnavigated the ship after the show and followed this with a cuppa with David and Elaine before retiring.